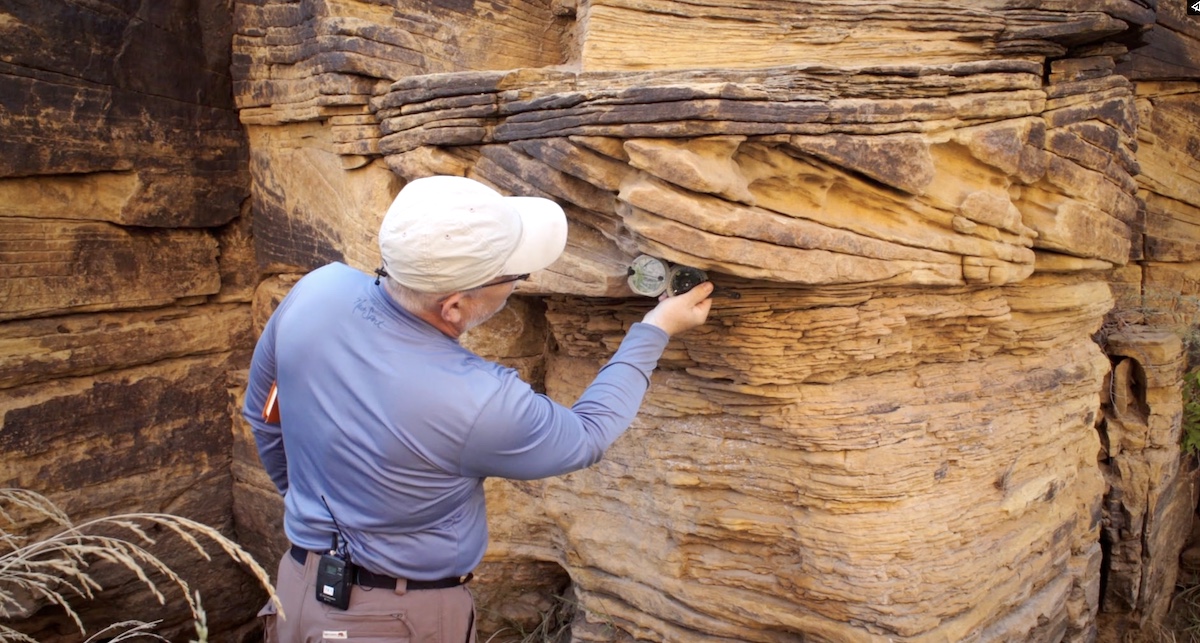 Dr. John Whitmore is the senior geology professor at Cedarville University. He plays a key role in our upcoming film Mountains After the Flood.

Dr. Whitmore has been teaching the next generation of creation scientists at Cedarville since 1991. He can often be found on field trips across the United States with his students. In the summers, he regularly teaches geology on Grand Canyon rafting trips.

Dr. Whitmore is best known for his important work on the Coconino Sandstone. This sandstone is a well-known rock layer of the Grand Canyon. It is the light beige colored sandstone that is often seen higher in the canyon walls.

Conventional scientists have long considered this sandstone layer to be an example of an ancient desert filled with sand dunes. The technical term is eolian, or wind-blown, sandstone.

Through years of closer examination, however, Dr. Whitmore has provided significant evidence against this view. Instead, he argues the Coconino should be interpreted as a massive underwater sand deposit, or marine sandstone. In other words, the Coconino provides impressive evidence for a global flood.

While Dr. Whitmore was in the Grand Canyon in 2017, he had the opportunity to stop at a number of places where he could demonstrate these unique aspects of the Coconino sandstone. These ten evidences provide reasonable support for rethinking the origin of this famous beige-colored formation.

One of the wide-spread characteristics of the Coconino is the dark diagonal lines that can be seen throughout the formation. These are called cross-beds.

Cross-beds occur when layers of sand form at an angle due to wind or water currents. In our film Is Genesis History?, Dr. Andrew Snelling discussed these cross-beds in the Coconino. He explained he was reporting the work of his friend Dr. Whitmore who had personally taken hundreds of measurements of the angle of these beds.

Why is it important to measure the angle? There is a difference between the angles of desert sand dunes and underwater sand dunes. Dr. Whitmore uses a special geologic tool called a Brunton compass to measure both the angles of the beds and the direction in which the beds dip.

In this video, Dr. Whitmore shows how he takes measurements, demonstrates his methods, and explains why he thinks the cross-beds were created in a marine environment. 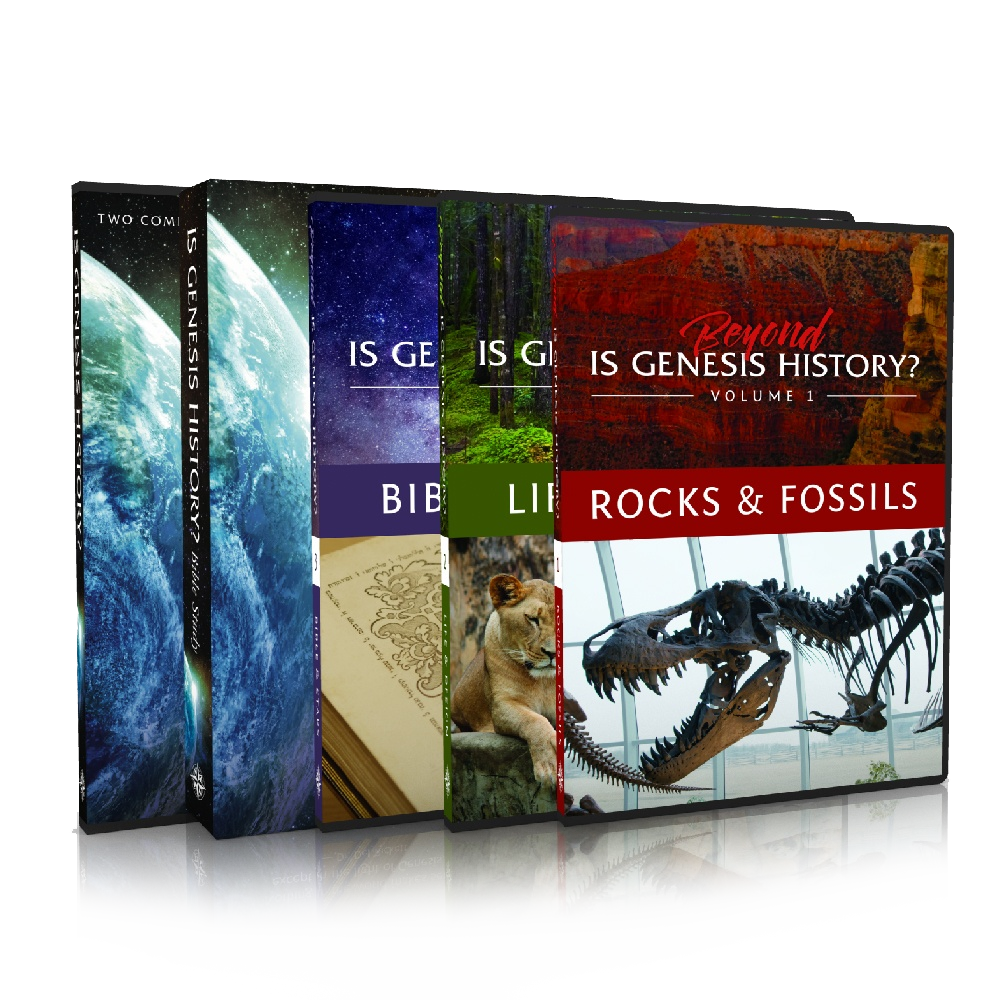 ends Jan 31
Own our entire Creation Science library for 50% off.
View Special Offer

Another characteristic of the Coconino is the fascinating animal tracks that can be found in many locations. The conventional view thinks these are footprints that were left by small lizards in dry desert dunes. Dr. Whitmore, however, thinks they show numerous indications that they were made by creatures underwater.

In this video, Dr. Whitmore examines a series of footprints. He examines their angle, the nature of the claw marks, the finely preserved details, and the lines in the rock that reveal the direction of the water current.

A third characteristic of the Coconino is the unusual dots found in exposed locations of the rock. These have traditionally been interpreted as fossil raindrop imprints in the Coconino.

Dr. Whitmore observes there is the difference between modern raindrop patterns and what is seen in the Coconino. Instead, he shows how the dimple-like patterns of the Coconino more closely fit animal burrows.

A fourth characteristic is a bit more complex to understand, but perhaps the most fascinating. The Coconino Sandstone sits on top of a different layer of rock called the Hermit Formation. It forms a distinct, flat contact that we can see throughout the Grand Canyon. You can see the lighter Coconino sandstone formation rock layer sitting above the darker Hermit shale formation rock layer in the photo below.

Conventional scientists think there are 10-12 millions years between these two layers. There are, however, unique connections between the two layers. In certain places, sand has intruded from the Coconino sandstone layer down into the Hermit shale layer.

These are known as sand injectites. In the picture below, you can see the line of sand extending into the rock beneath.

Why are these sand injectites in the Hermit shale? What do they indicate about the age and relationship between these two layers? When did they occur?

Dr. Whitmore has done extensive research on these unusual structures. They provide a fourth, important evidence in the Coconino sandstone for a global Flood.

This final video includes five additional characteristics of the Coconino that Dr. Whitmore has studied. He actually takes a step back and talks about the reason the Coconino is so important, then goes into the other evidences.

As you may already have realized, these videos were taken at different points in his river journey, sometimes days apart. In this instance, he explains cross-beds, then he dives into five more lines of evidence, some of which are a bit technical. They reveal, however, the overwhelmingly detailed work that Dr. Whitmore has done to test his theory regarding the origin of the Coconino sandstone. It is impressive.

If you want to learn more about this fascinating sandstone and its implications in Flood geology, Dr. Whitmore has written a number of general and technical articles on the topic. You can find links to two of those articles below:

General: Coconino Sandstone—The Most Powerful Argument Against the Flood?

Technical: The Coconino Sandstone: Implications for the Origin of Ancient Cross-bedded Sandstones

Sara Anne graduated from Cedarville University in 2021 with a degree in geology. She has done research on radiohalos and a dinosaur femur under the guidance of Dr. Andrew Snelling and Dr. John Whitmore.