“It is hard to imagine anything more important for the Christian, especially in the times in which we live, than to stand firmly upon a solid biblical worldview foundation… one that provides a comprehensive and systematic understanding of every area of life and reality.” -Del Tackett 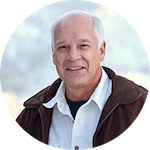 Del hosted and taught the Cross Examine television series. He also created several video series, including Who Is Jesus? and Focus on the Family’s The Truth Project, a worldview curriculum estimated to have been seen by over 12 million people worldwide.

Del served more than 20 years as an officer in the United States Air Force. During the George H. W. Bush administration, he served at the White House as director of technical planning for the National Security Council.

Del worked for years in the software engineering discipline and led the tiger team that developed a critical command and control system for NORAD in Cheyenne Mountain, Colorado.

Del is one of the founders of New Geneva Theological Seminary and was a professor of numerous worldview courses. He led and taught for years at the collegiate Focus Leadership Institute. He currently teaches as an adjunct professor for the Alliance Defending Freedom, Summit Ministries and Impact 360. Del has his doctorate in Management and Computer Science.