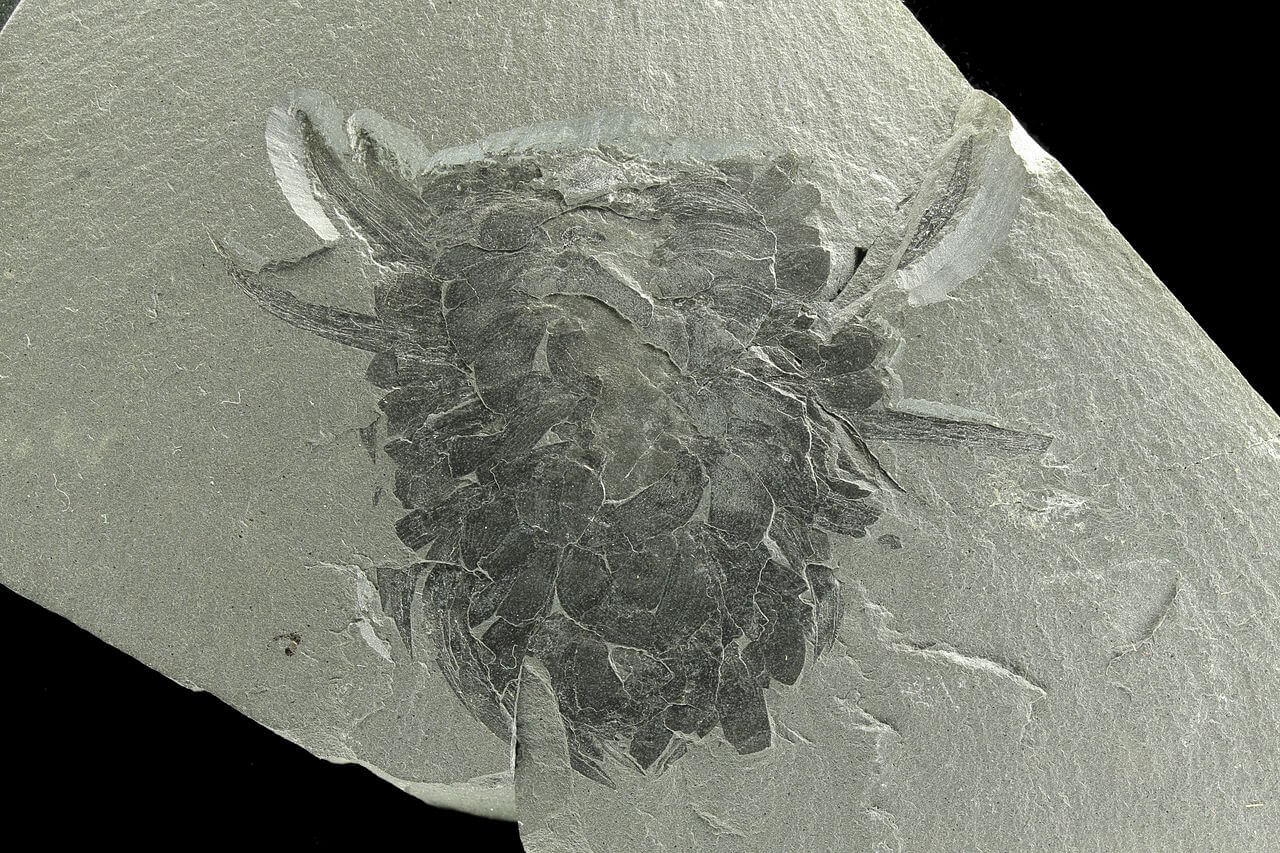 I suspect you’ve seen a fossil at some point. Even if you’ve never been to a dinosaur dig or a natural history museum, you’ve probably seen a broken shell in a rock (fossilized marine life) or a piece of coal (fossilized vegetation). Fossils are actually all around us, whether deep beneath our feet or hidden in the rock of a road cut we’re passing on the highway.

This might lead us to think that fossilization is a common process today, but apparently it’s not. During our visit to Wyoming, Dr. Art Chadwick explained, “Fossilization requires rapid burial, and it requires other unique conditions that normally are not present. If my dog dies and I bury him in the backyard, he’s not made into a fossil.  He’s going to deteriorate just like he would if he were above ground. But under unique circumstances, where you have rapid burial and then you have minerals coming in, and altering those remains, then you can preserve the fossil.”

If fossilization is not happening in any extensive way today, then why do we have billions of fossils in the world?  There are two competing answers.  The conventional view is that the fossil record is a history of life’s appearance, development, and, in many cases, extinction, over hundreds of millions of years.

During that long period, the continents rose and sank over a dozen times letting the seas slowly cover them to create all the layers in the rock record. As a result, a minuscule fraction of all the creatures that have ever lived happened to be in the right conditions to be fossilized.

The second view, based on the account in Genesis, is that the fossil record is a history of a series of major water-based catastrophes. These started with the global flood lasting a year which killed nearly everything alive. They continued afterward with local floods that incrementally decreased in size.

One key aspect of these water-based catastrophes was that they transported enormous amounts of sediment and mud in huge waves and currents that captured many of the creatures living in the world and quickly buried them, one enormous layer after another. After the flood, smaller groups of creatures were captured in regional catastrophes.

I didn’t know much about fossils before embarking on this project, so I had to do a lot of reading just to get conversant. One of the books I relied upon was Andrew Snelling’s Earth’s Catastrophic Past.

While reading it, one of the more fascinating things I learned about was the world-wide distribution of enormous fossil graveyards with exquisitely preserved fossils. They are called fossil Lagerstätten (German plural for “storage places”). In my opinion, they could also be called fossil treasure troves. Just take a look at some of the fossils found in them:

“It is virtually impossible to find specific present-day depositional areas where fossils are forming that are analogous to the fossil deposits found in the rock record.” – Andrew Snelling, PhD

Leftovers from the Global Flood

These incredible fossil graveyards make a lot of sense from the perspective of a global flood. It is clear that the creatures had to have been rapidly buried in extremely unique conditions where there was just the right mix of minerals to preserve them so well.  But there are a lot of these Lagerstätten in almost all the levels of the fossil record scattered all over the world.  Andrew Snelling points out,

“The frequent occurrence of fossils, especially in large accumulations called fossil graveyards, suggests specialized conditions repeatedly on large scales. However, it is virtually impossible to find specific present-day depositional areas where fossils are forming that are analogous to the fossil deposits found in the rock record.” (Earth’s Catastrophic Past, p. 536)

Fossil graveyards are important evidence for the global flood for a number of reasons: 1) they demonstrate rapid burial in massive proportions, 2) they demonstrate unusual sediment conditions not found today, 3) they demonstrate a wide variety of creatures preserved in communities, 4) they regularly mix marine and terrestrial creatures, 5) they are found at all levels of the fossil record all over the world.

There are two types of fossil-Lagerstätten. The area we filmed in Wyoming is a Lagerstätte known as a “concentration” type since it’s a bone bed where there are lots of bones in one place, just all broken apart.  The other type is known as a “conservation” which can even preserve the soft parts and finest details of the creatures, providing us almost snapshots in some instances of what these creatures looked like when alive.

Personally, I find these fossil graveyards incredibly interesting to look at, so I’ve compiled a few with photos. Fossil-Lagerstätten are windows into the world before the flood, as well as the world just recovering from the flood, and they show us the incredible diversity of life that was captured and destroyed.  In many cases, it was never to be seen again in the new world established on the other side of the flood.

These are some of the first sea-dwelling animals captured during the flood. What makes this find so exceptional is that both hard-body and soft-body creatures were preserved in exquisite detail.  This graveyard shows the magically different body forms of creatures living at the bottom of the ocean before the flood.

From a fossil record perspective, these creatures are the very lowest fossils – there is nothing complex beneath them.  They suddenly appear fully-formed with an entire ecosystem – exactly what we would expect if the flood started in the oceans and began dragging the animals dwelling on the sea floor up onto the continents.

These creatures would have been killed during the middle to late part of the flood.  It is an assemblage of marine creatures that includes many fish and reptile fossils perfectly preserved. 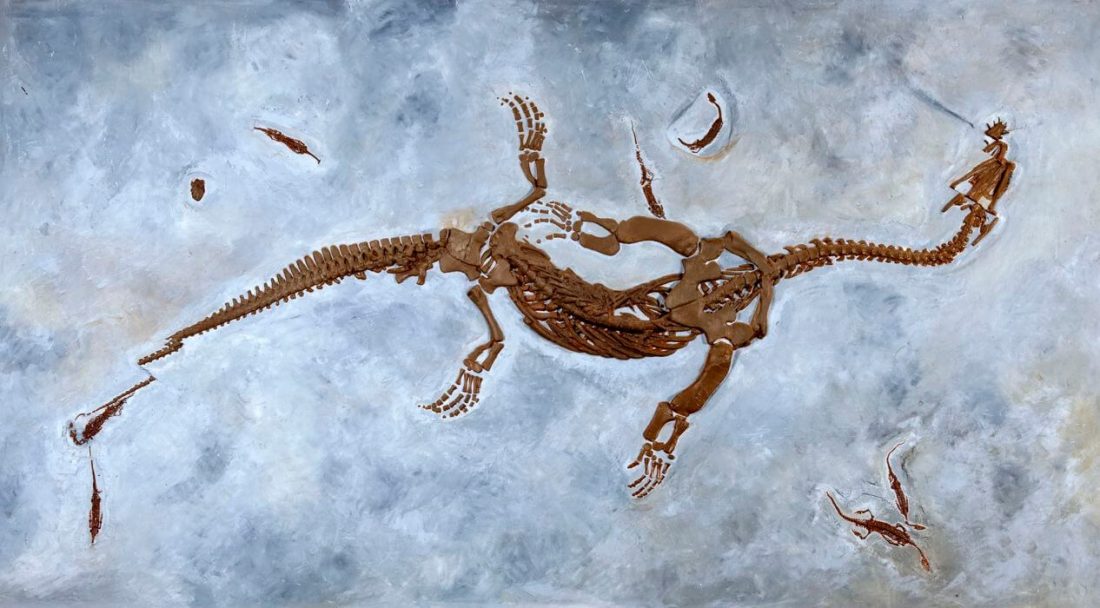 Andrew Snelling explains: “Fish, like so many other creatures, do not naturally become entombed like this, but are usually devoured by other fish or scavengers after dying…In the fossil assemblage at Monte San Giorgio are some indisputable terrestrial reptiles among the marine reptiles and fishes. Thus, to fossilize all those fish with the large marine and terrestrial reptiles, so that they are all exquisitely preserved, would have required a catastrophic water flow to sweep all these animals together and bury them in fine-grained mud.” (ECP, p. 543)

This formation is one of the very best in the world for a variety of fossils. What makes it so unique is the type of fossilization due to the presence of certain minerals alongside rapid burial. Scales, fibrils, muscle tissue, skin – everything has been preserved. These creatures would have been killed at the end of the flood as the waters were covering and burying animals and plants in the top-most fossil layers.

Again, Andrew Snelling explains: “It is abundantly clear from examination of the incredible preservation of so many fossils in the Santana formation that this fossil graveyard represents a spectacular catastrophic event, given that flying reptiles and terrestrial dinosaurs, plants, insects and spiders are found buried together and exquisitely preserved as fossils with fish of many types, crocodiles, turtles, and various marine invertebrates….Obviously, to produce this fossil graveyard required a catastrophic mass-mortality event to virtually instantaneously kill and bury all these organisms together.” (ECP, p. 546)

Here is an example of a Lagerstätte captured after the flood during the catastrophic recovery period. If you think about it, flood waters would have left huge lakes all around the world as a result of the earth movements and moving water, not to mention suddenly swelling rivers and streams, as well as shifting water channels.

What makes the Green River Formation particularly interesting is that the fish and animals are obviously living together around an area of water when they were instantly captured. There are many thin sedimentary layers within which the fish and other animals have been perfectly preserved. Fish are rarely found fossilized due to their body composition, natural scavenging, and a well-known tendency to float when dead. To achieve this kind exceptional preservation for so many fish over so many thin layers means the layers had to have been laid down very quickly and deeply to preserve them so perfectly.

These are just a few of the many fossil graveyards scattered all around the world.  I find them to be extremely convincing evidence for a global flood that rapidly and catastrophically picked up land and marine creatures, mixed them together, then suddenly deposited them in massive amounts of sediment to preserve them for our eventual discovery.  They give a stunning testimony to the global destructiveness of the flood.

If you are interested in learning more about fossil graveyards, I recommend you consult Andrew Snelling’s Earth’s CatastrophicPast. The two-volume set is an excellent reference for many different issues.