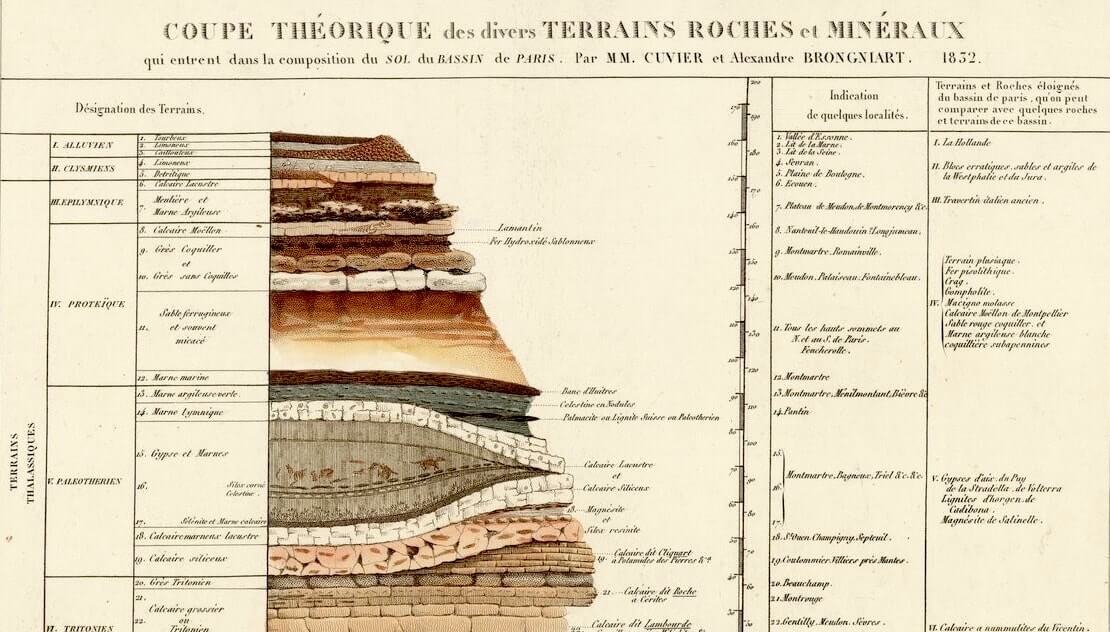 This is an excerpt from “Lesson 5: The Global Flood” from the Is Genesis History? Bible Study.

In the late 18th and early-19th centuries, a number of geologists began to argue that the thick sedimentary rock layers on the earth were not formed quickly during a global flood, but slowly over long ages. As a result of this shift in interpretation, a number of Christian pastors and theologians began to re-interpret verses referring to the flood as a local, rather than a global, inundation.

That view has continued to this day. Many commentaries, study Bibles, and Bible encyclopedias incorporate this interpretation of a local flood into their publications. They often change the Hebrew word historically translated as “earth” to “land,” then explain that Genesis 6-8 is referring to a local flood that only covered a section of Mesopotamia rather than the entire world.

Their solution is therefore to re-interpret the Genesis flood as a local flood that occurred somewhere in the Middle East, thereby avoiding a direct conflict with the interpretations of conventional geologists. This line of thinking, however, leads to a new set of questions.

Why Did Noah Need an Ark?

After all, if the flood was local, why go through all the trouble of building an ark? Yet that’s not the only concern:

The interpretive problems of a local flood multiply as one tries to fit it into the historical narrative of the Bible. Of course, from a geological perspective, things don’t get any easier when trying to establish a massive, year-long flood in the Middle East large enough to inundate everything.

In a personal conversation, sedimentary geologist Dr. Steve Austin pointed out that the sedimentary evidence for a flood large enough to float Noah’s ark is not observable in the right places in Mesopotamian strata. Small floods have been identified in some archeological strata, but they are not large enough to float a boat as big as the Ark for a year. Furthermore, assuming the current configuration of the Mesopotamian basin, the water of a major flood would quickly flow into the Persian Gulf via the Tigris and Euphrates rivers.

In spite of these things, the desire to maintain some sort of concord with the conventionally-accepted scientific view is extremely powerful.

Yet many Christians do not realize how the flood relates to the doctrine of judgment. A global flood is obviously being held up by Jesus and Peter as the model of the coming global judgment of God — not only in extent, but in suddenness and complete destruction.

Why is the Flood important to the Doctrine of Judgment?

Everything goes back to what one thinks of the majority of the rock layers on the earth. They are thick, they are enormous in extent, and they are filled with billions of dead creatures.

If one sees them as the result of a global flood, then the text fits neatly with the world around us. The layers are therefore snapshots of different ecosystems existing before the Flood that “had corrupted their way on the earth” and which God wiped out in judgment.

If one holds to a global flood, the doctrine of judgment is embedded into the very fabric of our world.

This means there is a constant, visual reminder of God’s judgment everywhere in the world. When one looks up and sees the massive layers of rock with endless fossils in them, one should think: ‘That is what happened as a result of sin leading to judgment.’ If one holds to a global flood, the doctrine of judgment is embedded into the very fabric of our world.

If, however, one sees the rock layers as the result of the slow rise and fall of epicontinental seas over hundreds of millions of years, then God’s judgment is erased from the earth. The rock layers are not a picture of punishment for sin, but of deep time. They instead provide a record of hundreds of millions of years of corruption, disease, and death of countless creatures living long before Adam.

This presents an additional set of problems for Christians who hold to a local flood: how do you explain the fossils within the rock layers if God is the creator of all living things?

What about the Fossils?

One solution proposed by a French naturalist in the early 19th-century was that different types of creatures were progressively created by God at various times in the past, some of whom died out during extinction events, only to be replaced millions of years later with new creatures. This “progressive creation” process happened over and over again until, eventually, God created Adam and Eve.

A prerequisite for this view is that one must assume the record of creation in Genesis is allegorical; it certainly cannot be literal. There is no mention anywhere of multiple creation events of successive types of marine creatures, plants, birds, and animals separated by long periods. Furthermore, there’s no clear connection between the actual events recorded in Genesis and what we see in the rock layers.

By abandoning the events of Genesis, progressive creationists therefore severed their connection with Special Revelation. This was something even non-Christians recognized.

In his introduction to The Origin of Species, Charles Darwin quoted agnostic Thomas Huxley saying, “if we suppose that each species of animal and plant…was formed and placed upon the surface of the globe at long intervals by a distinct act of creative power…it is well to remember that such an assumption is as unsupported by tradition or revelation as it is opposed to the general analogy of nature.”

A Flood of Evolutionists

This began in earnest with the publication of Charles Darwin’s The Origin of Species in 1859.

In the last chapter of his book in which he summaries his argument, it is obvious that his true opponent is the progressive creationist who asserts that God created all the creatures on the earth at various times and in various places over long ages. As he marshals different types of evidence, his repetitive conclusion is simply this: “It must be admitted that these facts receive no explanation on the theory of creation.”

Darwin’s ideas made quick work of progressive creation. Within a generation, most scientists and many theologians adopted evolutionary theory as the best explanation of how varieties of life came to be on the earth. It did not seem to matter that much of the evidence against evolution was legitimate: the fact that progressive creationists did not have a theory that could positively replace evolution was a significant problem.

An argument could therefore be made that it was the rejection of a global flood by 18th and 19th-century geologists and Christians that led to the eventual rejection of the entire doctrine of creation.

The issue, therefore, goes back to time: are the rocks a result of long ages and slow deposition or a short period and global judgment?

The history of these issues should give pause to modern evangelical Bible scholars desiring to interpret Genesis 6-8 as a local flood. Not only does this reinterpretation transform the doctrine of judgment, but it opens the door for the rejection of other basic Biblical doctrines, starting first with the doctrine of creation.

This article and more are part of the Is Genesis History? Bible Study