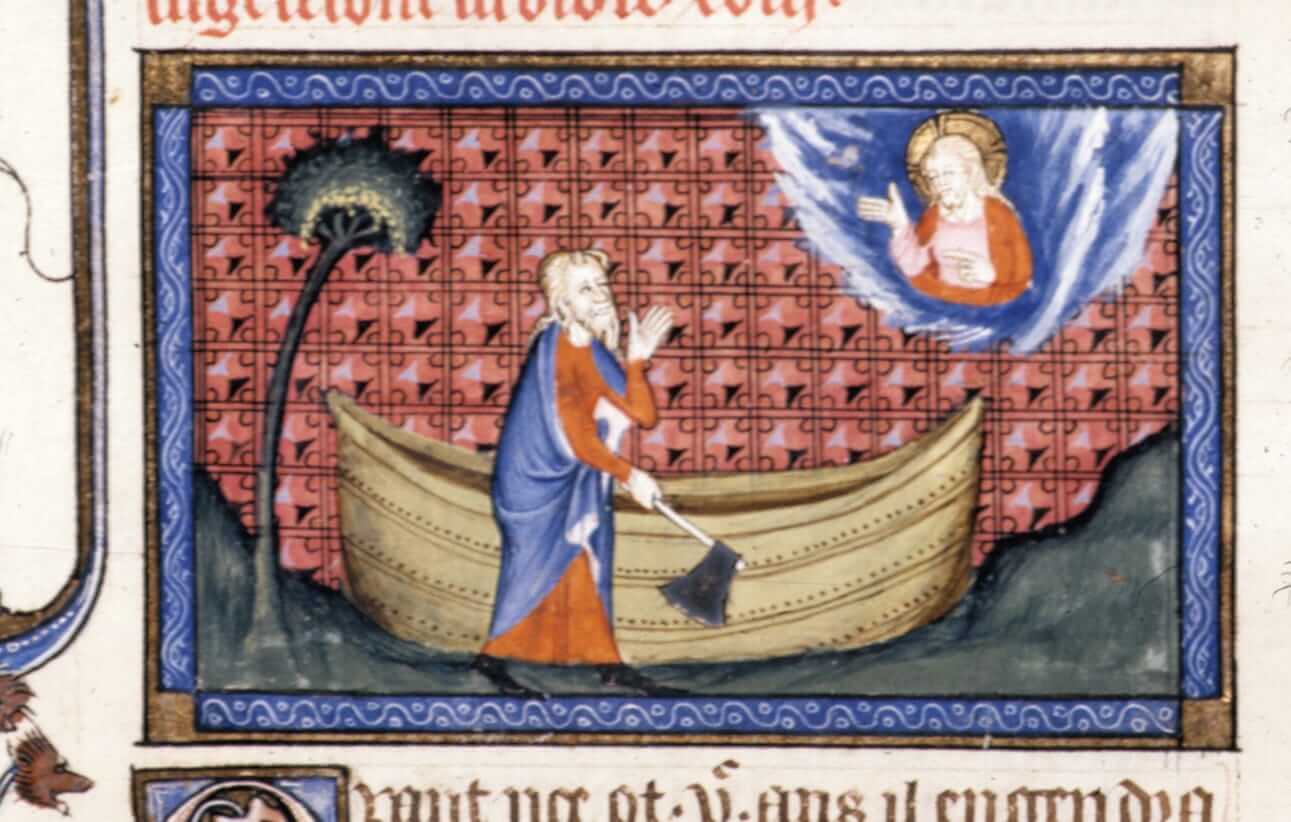 What did Jesus and Luke say about Genesis?

“For as were the days of Noah, so will be the coming of the Son of Man.” – Jesus of Nazareth

The Thread of History

I teach a filmmaking class to a small group of homeschoolers. We spend the first few weeks going through key people in film history who died before any of us were born: Thomas Edison, the Lumière brothers, D.W. Griffith, Charlie Chaplin, Sergei Eisenstein, and so forth.  I talk about how these were real people who did something important – invent a camera, a way of filmmaking – that can be connected to what we are doing as filmmakers today.

This pulling of the thread of history can be done with anything: business, science, technology, government, education – everything is linked back to real people and events that lived and happened sometime in the past. We could even say that the present is unchangeably connected to the past through an unbroken chain of real individuals.

That seems to be the view of the writers of the New Testament. They regularly refer back to people and events that happened long before them but which are still connected to their lives in the first century AD.

This is one of the key assumptions of our project on Genesis: people like Paul, Luke, Jesus, Peter, and John refer to the people and events of Genesis as real history. They talk about them like we talk about historical people and events that had an impact on our lives today.

What exactly do the writers of the New Testament say about the people and events of Genesis?  It’s helpful to see what they actually say, so let’s plow through a number of interesting quotes.

Genesis according to Jesus

One of Jesus’ favorite methods was to ask people if they had read a passage from the Old Testament. This is a good approach: start with the text.  In talking about divorce, Jesus asks: “Have you not read that He who created them from the beginning made them male and female, and said, ‘Therefore a man shall leave his father and his mother and hold fast to his wife, and the two shall become one flesh’?” (Matthew 19:4-5)

Jesus obviously had read Genesis 1 and 2 because He’s quoting it.  We don’t often think about Jesus reading the Old Testament, but He did.  As a well-taught Jewish boy in the first century, He would have gone through the normal Torah instruction all boys His age did.

In other words, Jesus is pointing out that Adam and Eve were real people who were created in the beginning to be married only to each other.  He wants to remind His listeners when they were created so they would know it has always been that way; as a result, their pretensions to divorce were against the creation order established at the start of all things.  According to Jesus, Adam and Eve were two real people created to be married at a real time, and his listeners would be wise to understand the importance of that.

In another passage, Matthew records how Jesus condemns the pharisees and scribes for their blatant hypocrisy.  Not one to mince words, He tells them God sent them the prophets to kill “so that on you may come all the righteous blood shed on earth, from the blood of righteous Abel to the blood of Zechariah the son of Barachiah…”(Matthew 23:35)  According to Jesus, Abel was a real person whose blood was shed by his brother, but whose punishment would fall onto all those who rejected God’s prophets.

I find this interesting for a number of reasons. First, not only does Jesus know the catastrophic historical events recorded in Genesis 6 and 7, but He also knows His audience is familiar with them. Their prior understanding of the flood’s unexpected, total destruction is the basis for His comparison.

Second, Jesus describes the normal actions of the people living in Noah’s day as “unaware” that a flood was coming.  This is how we hear people describe natural disasters; they are consistently surprised by them.  It is an interesting note of historical authenticity that plays into His comparison.

Third, Jesus says the flood swept them all away.  The fact that Jesus is linking an event where “all flesh died that moved on the earth, birds, livestock, beasts, all swarming creatures that swarm on the earth, and all mankind” to His eventual return, means something about that return.  It’s going to be big, and it’s going to affect everyone.

According to Jesus, Noah, the ark, and a global flood that killed all the birds, beasts, and people on the earth, were as historically real as His second coming.  They are a historical preview of coming attractions that everyone would be wise to remember in terms of their timing and scope.

This is one of the many reasons the idea that Noah’s flood was a local flood somewhere in the Middle East is a misguided interpretation.  It does not fit the language of Genesis, well-known to both Jesus and His disciples, which is central to His comparison.  Were the flood recorded in Genesis just local, it would make Jesus’ comparison be that ‘my return is going to be local, and it’s going to affect a few living creatures.’  But that’s not what either Jesus or Genesis says.

The fact that Jesus was well acquainted with the actual words of Genesis and knew them to be real history is why it is such a powerful statement.  If Noah was not real, or if everyone in the world was not killed, or if the flood was not global, then Jesus’ comments make no sense.  As He might say to a modern audience debating Noah and the extent of the flood, “Have you not read what I said about them?”

Genesis According to Luke

Luke is probably the best historian of the New Testament.  I say this for two reasons.  First, he did not personally witness most of the events he wrote about, but instead “having followed all things closely for some time past” decided “to write an orderly account” concerning the life of Jesus and the early church. This means he had to interview people and read things written by others to “compile a narrative of the things that have been accomplished among us.” (Luke 1:1-3)

Second, Luke takes great care to link the events he’s writing about to the generally-accepted calendar markers of his day.  These include governmental posts and reigns of emperors.  He also took time to research the family genealogical lists of Joseph and Mary’s line to show how Jesus’ physical descent was linked back in time through real people.

There is nothing more basic to understanding the links making up history than a genealogical list.  Although they are often skipped over by modern readers, in the first century they would have been of primary importance.  This is why they start both Matthew’s and Luke’s gospels; they are intentionally different, too, since one is royal and the other physical – both important lineages for Jesus being the Christ.

In the third chapter of his gospel, Luke finishes his account of Jesus’ baptism by quoting the words of God from heaven: “You are my beloved Son; with you I am well pleased.” This statement from God provides us Jesus’ direct divine lineage. But knowing that Jesus was both God and man, Luke proceeds to show how he is linked back to Adam, the first son of God.

And so Luke plows through the 70-odd men who are physically related to Jesus, going back through David, Abraham, Noah, and ending with “Adam, the son of God.”  This is basically a genealogical timeline of the world from the beginning of creation to Jesus.  Luke clearly sees all these names as real men who conceived sons with their wives (the possibility of Levirate marriage naturally included).  In one sense, genealogy just lists the chain links of history.

Furthermore, Luke goes on in his next section to show us that both Jesus and Adam hold similar roles in the history of the world.  Luke assumes his readers know about the history recorded in Genesis 3 (a temptation of the “first man” by Satan in a bountiful garden), so that they will understand what happened to Jesus (a temptation of the “last man” by Satan in a wilderness, the barren result of God’s curse on His creation).

The point here is that Luke is intimately aware of the history recorded in Genesis. According to Luke, all the people he lists out in his genealogy are real people who lived at real times whose actions had real consequences. This is, after all, what good historians do: they show how different events that happen in history are related.

In fact, the relationship between Jesus and Adam is the most important relationship in all of history. It is central to the gospel and what Jesus came to do. We can therefore do no better than to end with the apostle Paul’s explanation of what these men did that has the utmost impact on our lives today:

“For if many died through one man’s trespass, much more have the grace of God and the free gift by the grace of that one man Jesus Christ abounded for many. And the free gift is not like the result of that one man’s sin. For the judgment following one trespass brought condemnation, but the free gift following many trespasses brought justification. For if, because of one man’s trespass, death reigned through that one man, much more will those who receive the abundance of grace and the free gift of righteousness reign in life through the one man Jesus Christ. Therefore, as one trespass led to condemnation for all men, so one act of righteousness leads to justification and life for all men. For as by the one man’s disobedience the many were made sinners, so by the one man’s obedience the many will be made righteous.” (Romans 5:15-18)