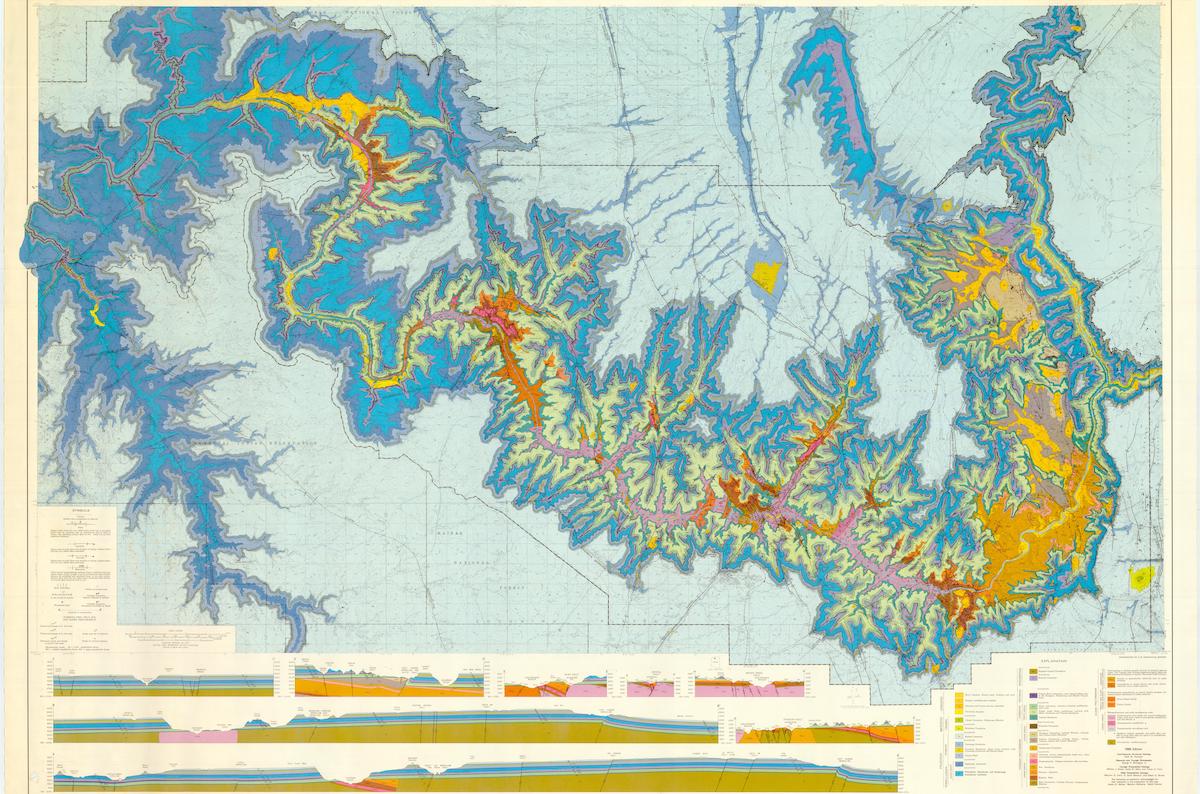 Mapping the Research for Mountains After the Flood

One of the fascinating things about maps is that they give us a bird’s eye view of God’s creation.

When we were filming at Cedarville University in 2021, Dr. John Whitmore pulled out a map of the Grand Canyon to provide some perspective on what he and Dr. Andrew Snelling accomplished on their research trip. (You can watch this in the video at the end of the post.)

Dr. Snelling’s research provides the backbone for our upcoming film. In 2017, he and Dr. Whitmore traveled by boat down the Colorado River to collect a series of rock samples at different points in the Canyon. Their primary interest was understanding more about the enormous folded rock layers at the bottom of the Canyon.

Were those layers soft and pliable when they formed, or were they hard and brittle? If it could be demonstrated they were soft when they folded, they couldn’t be hundreds of millions of years old. This new research could therefore provide important new evidence of a global flood and a young earth.

Although the folds appear to be smooth at normal observational levels, Andrew knew he needed to look at the rocks under the microscope. What did they reveal at a crystalline level? Did they show evidence of slow movement of the grains relative to one another while the rock itself was brittle, or rapid movement while the sediment was still soft?

To test his theory, Andrew needed to collect two different series of samples from the same layer of rock. One series would be taken from where the rock layer was sharply folded; the other series would be taken many miles aways where the same rock layer was lying flat. By comparing these samples, he would have a good indication of the condition of the rock when it folded.

While at the map, John and Andrew explained what they saw and why it was so important. Our ability to capture them with the map provided a much more revealing interview. They could just as easily have given the information in a normal setting, but it would not have allowed us to see into their world.

This is one of the things I’m most excited about in regard to our upcoming film. We have been able to capture actions that we weren’t able to capture in our first film.  More importantly, those actions show how creation scientists carefully proceed in their research. Although all of them have PhD’s, because they are creationists, their scientific credibility is constantly questioned by conventional scientists.

But if there is anything I’ve learned from working with creation scientists, it is that they care a great deal about the fine details. God’s creation is so extraordinarily complex that it requires the greatest focus and concentration to try to understand it. We must pay very close attention to the details if we want to grasp any of it, even a very small part of it—and even if that small part seems enormous like the huge folds in the Grand Canyon.

One of the things I therefore hope to accomplish with this film is to let everyone see the rigorous detail of their work. My approach to the film will be to follow the natural order of events. Just as Andrew and John explain the progression of their trip in this video, we will edit the film to show the true chronology of events throughout their multi-year research project.

By doing this, I hope to pull back the curtain on how creation science actually works, thus vindicating the scientific acumen of men like Andrew Snelling and John Whitmore. You can get a peek into their world with this short video filmed in Dr. Whitmore’s geology lab at Cedarville University.

If you’d like to look at the actual map yourself for comparison, here is a link to the Eastern Grand Canyon full-resolution map; please note it is extremely large.