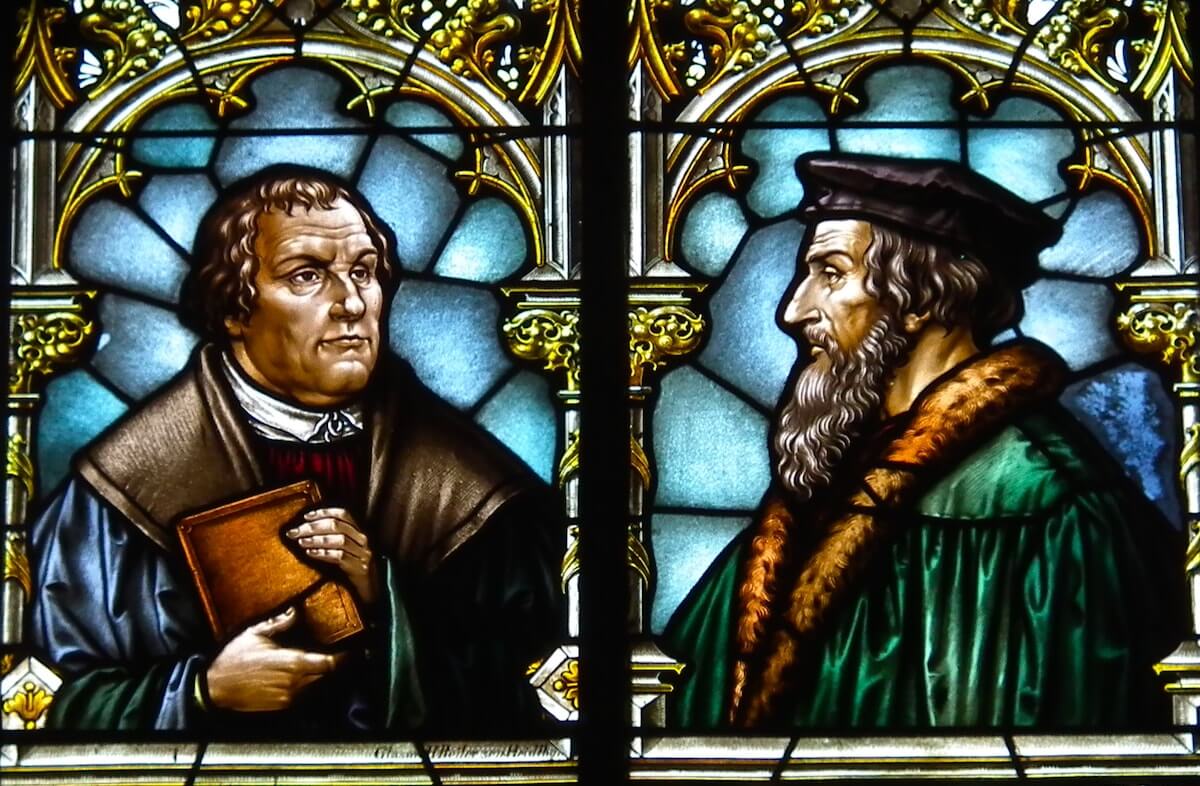 With the 500th Anniversary of the Reformation upon us, it’s worth reading what they said about the first chapters of Genesis. Both Martin Luther and John Calvin wrote commentaries on Genesis, so we can know exactly what they thought. Since it’s not possible to improve on what they said, let’s just read them at length:

John Calvin published his Commentary on Genesis in 1564 in Geneva. He begins by saying:

“Since the infinite wisdom of God is displayed in the admirable structure of heaven and earth, it is absolutely impossible to unfold The History of the Creation of the World in terms equal to its dignity…. The intention of Moses in beginning his Book with the creation of the world is, to render God, as it were, visible to us in his works. But here presumptuous men rise up, and scoffingly inquire, whence was this revealed to Moses? They therefore suppose him to be speaking fabulously of things unknown, because he was neither a spectator of the events he records, nor had learned the truth of them by reading. Such is their reasoning; but their dishonesty is easily exposed. For if they can destroy the credit of this history, because it is traced back through a long series of past ages, let them also prove those prophecies to be false in which the same history predicts occurrences which did not take place till many centuries afterwards.” (Calvin, p.57,58)

Martin Luther gave a series a lectures on Genesis which were compiled into a Critical and Devotional Commentary. He starts out explaining:

“This first chapter of our Holy Bible is written in the simplest and plainest language, and yet it contains the greatest and at the same time the most difficult themes….Equally useless is it to consider Moses in the beginning of his history as speaking mystically or allegorically. For as he is not instructing us concerning allegorical creatures and an allegorical world, but concerning essential creatures and a world visible and apprehensive by the senses, he calls, as we say in our trite proverb, “a post, a post ;” that is, when he says morning or day or evening, his meaning is the same as ours when we use those terms, without any allegory whatever.” (Luther, p.39,41)

Augustine of Hippo’s position on Genesis 1 was well-known in Luther’s day, so he addresses that in terms of creation in six normal days:

“Hilary and Augustine, two great lights in the church, believed that the world was made on a sudden and all at once, not successively during the space of six days. Augustine plays upon these six days in a marvelous manner in explaining them. He considers them to be mystical days of knowledge in the angels, and not natural days. Hence have arisen those continual discussions in the schools and in churches concerning the evening and morning knowledge, which Augustine was the cause of being introduced. These are all diligently collected and particularly mentioned by Lyra. Let those therefore who wish to know more about them consult Lyra….  With respect therefore to this opinion of Augustine, we conclude that Moses spoke literally and plainly and neither allegorically nor figuratively; that is he means that the world with all creatures was created in six days as he himself expresses it. If we cannot attain unto a comprehension of the reason why it was so, let us still remain scholars and leave all the preceptorship to the Holy Spirit!” (Luther, p.40-41)

3. Adam and Eve were the First Two People, Unique from the Rest of Creation

Questions concerning the extraordinary formation of Adam and Eve have always been lodged against Genesis. Calvin directly takes them up in discussing the formation of Eve:

“Although to profane persons this method of forming woman may seem ridiculous, and some of these may say that Moses is dealing in fables, yet to us the wonderful providence of God here shines forth; for, to the end that the conjunction of the human race might be the more sacred he purposed that both males and females should spring from one and the same origin. Therefore he created human nature in the person of Adam, and thence formed Eve, that the woman should be only a portion of the whole human race. This is the import of the words of Moses which we have had before, (Genesis 1:28,) “God created man… he made them male and female.” In this manner Adam was taught to recognize himself in his wife, as in a mirror; and Eve, in her turn, to submit herself willingly to her husband, as being taken out of him. But if the two sexes had proceeded from different sources, there would have been occasion either of mutual contempt, or envy, or contentions. And against what do perverse men here object? ‘The narration does not seem credible, since it is at variance with custom.’ As if, indeed, such an objection would have more color than one raised against the usual mode of the production of mankind, if the latter were not known by use and experience.” (Calvin, p.132-33)

Luther speaks on the differences between men and animals: “Moses however here sets before us the striking difference between man and all the animals mentioned; when he affirms that man was created by the peculiar counsel and providence of God; whereby he signifies that man is a creature far excelling all other animals, which live a corporeal life; which excellence was more especially prominent while nature was as yet unfallen and uncorrupted. The opinion of Epicurus was that man was created only to eat and to drink. This was not separating man from beasts: for beasts have also their pleasures, and they pursue them with delight. Whereas the sacred text before us forcibly expresses the distinction and separation of man from beast, when it affirms that God took deep thought and certain counsel in forming man; which counsel was taken, not only to form man, but to form him ‘4. in the image and after the likeness of God.” This image of God is a far different thing from the care of the belly and the indulgence of the appetite; for these things beasts well understand and eagerly crave.” (Luther, p.108-9)

4. Universal Corruption and Death entered the World at the Fall

Luther explains that: “For it was on [Adam’s] own account that the field was cursed. Whereas before lie sinned no part of the earth was either barren or corrupt, but all places in it were marvelously fertile and productive ; but now, the contrary, not only is it in many parts entirely barren, but even those parts, which are otherwise fruitful, are deformed and defiled with tares, weeds, briers and thorns. And this calamity is indeed great, and might well drive Adam himself and us all to choose strangling rather than life.” (Luther, p.315)

Calvin says: “Afterwards followed the fall of Adam, whereby he alienated himself from God; whence it came to pass that he was deprived of all rectitude. Thus Moses represents man as devoid of all good, blinded in understanding, perverse in heart, vitiated in every part, and under sentence of eternal death; but he soon adds the history of his restorations where Christ shines forth with the benefit of redemption.” (Calvin, p.65)

5. There was a Global Flood that Killed every Man and Creature on the Earth

Luther observes: “When therefore in the time of Noah the whole earth had been deluged by the Flood and every living creature except a few souls, bad been utterly destroyed, the age which immediately succeeded that of Noah lived without doubt in the fear of God.” (Luther, p.317)

And Calvin explains: “And the flood was forty days, etc. Moses copiously insists upon this fact, in order to show that the whole world was immersed in the waters. Moreover, it is to be regarded as the special design of this narrations that we should not ascribe to fortune, the flood by which the world perished; how ever customary it may be for men to cast some veil over the works of God, which may obscure either his goodness or his judgments manifested in them. But seeing it is plainly declared, that whatever was flourishing on the earth was destroyed, we hence infer, that it was an indisputable and signal judgment of God; especially since Noah alone remained secure, because he had embraced, by faith, the word in which salvation was contained.” (Calvin, p272-3)

Luther says: “From Moses however we know that 6000 years ago the world did not exist. But of this no philosopher can in any way be persuaded; because, according to Aristotle the first and the last man cannot in any way be determined, although however Aristotle leaves the problem in doubt whether or not the world is eternal, yet he is inclined to the opinion that it is eternal. For human reason cannot ascend higher than to declare that the world is eternal, and an infinite generation preceded us and will follow us. Here human reason is forced to stand still.” (Luther, p.40)

And Calvin says in his Institutes of the Christian Religion: “A rebellious spirit will display itself no less insolently when it hears that there are three persons in the divine essence, than when it hears that God when he created man foresaw every thing that was to happen to him. Nor will they abstain from their jeers when told that little more than five thousand years have elapsed since the creation of the world. For they will ask, Why did the power of God slumber so long in idleness? In short, nothing can be stated that they will not assail with derision. To quell their blasphemies, must we say nothing concerning the divinity of the Son and Spirit? Must the creation of the world be passed over in silence? No! The truth of God is too powerful, both here and everywhere, to dread the slanders of the ungodly…” (Calvin Institutes, p.2205)

If you’d like to read more from Calvin and Luther on Genesis, here are links to their entire volumes in PDF format: