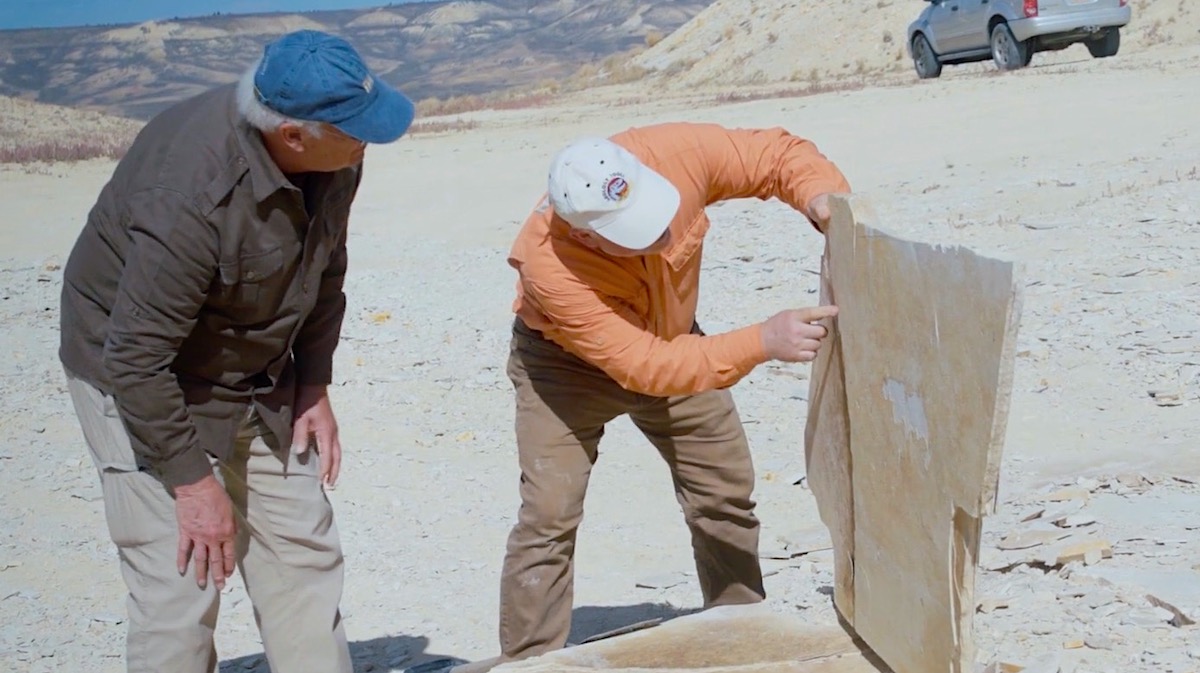 Fish Fossils in an Ancient Lake

An important aspect of our next film is to show how certain landscapes and formations correspond to different periods of earth history.  It’s not an easy thing to see at first.  But once you start looking at the world through the eyes of a creation geologist, it becomes a bit easier.

Dr. John Whitmore is the perfect guide. That may be because he’s spent three decades teaching geology to undergraduate students at Cedarville University. Whatever he’s talking about, he provides clarity that makes things easier to understand.

John played a key role in collecting rock samples with Dr. Andrew Snelling in the Grand Canyon. In our film, he will also explain earth history from a geological perspective. This includes his overview of what was happening in the world during the end of the Flood and continuing into the Post-Flood period.

But before we talk about that, let’s consider where the Green River Formation fits into earth history.

Mapping the End of the Flood

As we demonstrated in our first film, the Flood laid down enormous layers of continent-wide sediment that rapidly stacked up on top of each other. As the Flood waters swept back and forth, it eroded away sections of previous layers as well as depositing new layers on top.

Notice that the right side/southern layers have been pushed up so that they are higher than the layers on the left side/northern layers. This likely was a result of tectonic movements happening at the end of the Flood and continuing into the Post-Flood period.

Although Noah may already have stepped off the Ark halfway around the world, these earth movements continued around the world as layers tried to find a new equilibrium. As John Whitmore pointed out, Noah leaving the Ark was the theological end of the Flood, but geological upheaval continued to happen for a long time after that.

One result of that upheaval was the pushing up of mountains where Idaho, Wyoming, Utah, and Colorado come together. These new mountain ranges created new valleys and basins between them. The results are still there today as can be seen in this Google Earth snapshot of the area.

Since there was still an enormous amount of rainfall and storms after the Flood, these basins quickly became lakes whose bottoms soon filled with sediment that was being eroded from the nearby mountain ranges as storm water rushed down them. When the climate changed in later centuries, the lake eventually evaporated leaving just a dry lakebed (the tan colored area between the green mountains in the Google Earth image).

These events mark the transition into a new period of earth history called the ‘Post-Flood period.’ From a geological perspective, one can see a major change in the way sediment was being deposited.  During the Flood, layers were continent-wide and filled with marine fossils.  After the Flood, layers were in much smaller areas, often just filling in basins and lakebeds.

Here’s a cross-section from an area called the Green River Formation in Wyoming and Utah that clearly shows the geological differences between the two periods:

This may look like a jumble at first, so allow me to explain the sequence of events that formed this jigsaw puzzle. If you look at the bottom, you see a number of green-shaded layers that are twisted and bent.  These layers were laid down by the Flood. They were originally laid down flat, but tectonic earth movements at the end of the flood deformed them in various ways.

Once those layers were shifted, the higher areas were eroded away, probably during the enormous run off of flood water from the continent. You can see the results of this erosion on the left hand side.  While this was happening, however, the mountains continued to rise and thus created a new lake basin that you can see on the right.

During the Post-Flood period, a lake began to form here. For perhaps hundreds of years there was a flourishing eco-system with plants, fish, and animals. But eventually the climate changed and the lake dried out. All that was left a flat layer of sediment that is represented on this chart with the horizontal tan and brown layers on the right. They have not been upturned or eroded in the same way as the rock layers beneath them.

This area is now known as the Green River Formation. Besides being an interesting example of a post-flood lake, it’s also one of the most famous places in the world to find perfectly preserved fish fossils.

The Green River Formation and its fossils were the center of Dr. John Whitmore’s PhD research. His interest was to understand more about the tens of thousands of thin layers laid down in the lake that could fossilize so many creatures.

Those very thin layers—known as varves or laminations—were often pointed to as examples of tens of thousands of years of earth history. John wanted to understand how those layers and fossils could be reconciled with the history of the Post-Flood world as recorded in Genesis.

He spent many years carefully studying the dry lakebed. He also designed a number of experiments to test out his findings. All of this is an important part of being a creation scientist: it’s not about coming up with an idea then just saying it’s true. Rather, a creation scientist starts with a hypothesis that integrates with Biblical history, carefully gathers data, analyzes it, tests it, then examines it together to try to reconstruct what happened in the past.

In John’s particular case, he made some fascinating discoveries that provide new insight as to what was going on in the post-flood world. We will be featuring him and his work in our upcoming film. You can watch a clip from the film where he takes Del to the ancient lakebed to find fossil fish and explain his findings.