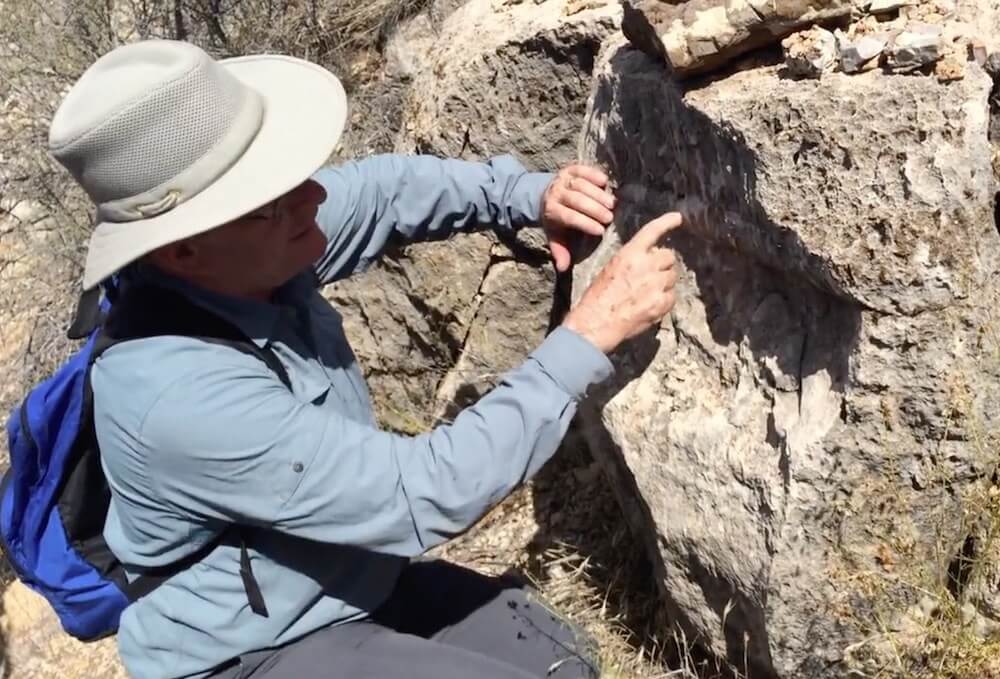 It was probably 90 degrees under a blazing hot sun when we hiked with Dr. Steve Austin to see one of his nautiloid beds.  We had already driven 20 miles down a bumpy gravel road with scrub brush, cactus, and tall rocks off to either side, when Steve suddenly said, “stop here.”  We parked our bruised mini-vans to one side, climbed out, sorted through the cameras and gear, pulled on our backpacks, and marched off.  The dry brush caught at our feet and little burrs worked their way into our shoes as we tramped along. (Disclaimer: These are from my iPhone. There’s a reason why I don’t do the filming…)

We were hiking down an old water course, so it twisted back and forth as we descended toward the river many miles away. We kept asking Steve how far we had to go, and he kept saying, “just around the corner up here.”  We eventually stopped asking.  After an hour, he pointed up to a ridge and said: “There’s a good one up there.”  So we hiked up the hill and looked at our first nautiloid, it was great.  We then had to continue on around a corner or two to end up at the larger Nautiloid bed:

This was a big deal for me.  The first thing I read on the Grand Canyon was Steve’s excellent book Grand Canyon: Monument to Catastrophe.  It is a good introduction to Steve’s work, and I read it with much interest at the start of my project.  One of the things that stood out to me was his commentary about nautiloid fossils in the Redwall Limestone.  When I finished reading about it, I thought, I want to film Steve Austin showing me those nautiloids.  And here we were, a year later, filming him in front of them.

So why are these fossils so interesting?  They provide unique evidence for how the Flood destroyed an enormous number of creatures quickly, then froze them in place.  We had actually intended on including a segment in the film on nautiloids, but had to cut it out to save time. (I realized we would discuss similar things in Art Chadwick’s segment on the bone bed, anyway.) Here it is:

Since I couldn’t stop in the middle of the film and make bullet points, perhaps it’s better to have included it here.  These are my takeaways:

All to say, the nautiloid bed was a fascinating part of capturing the story for Is Genesis History? We will eventually include the full interview with Steve at his nautiloid beds on his Extended Interview DVD, coming out later this year.

P.S. Here’s what we looked liked walking out…