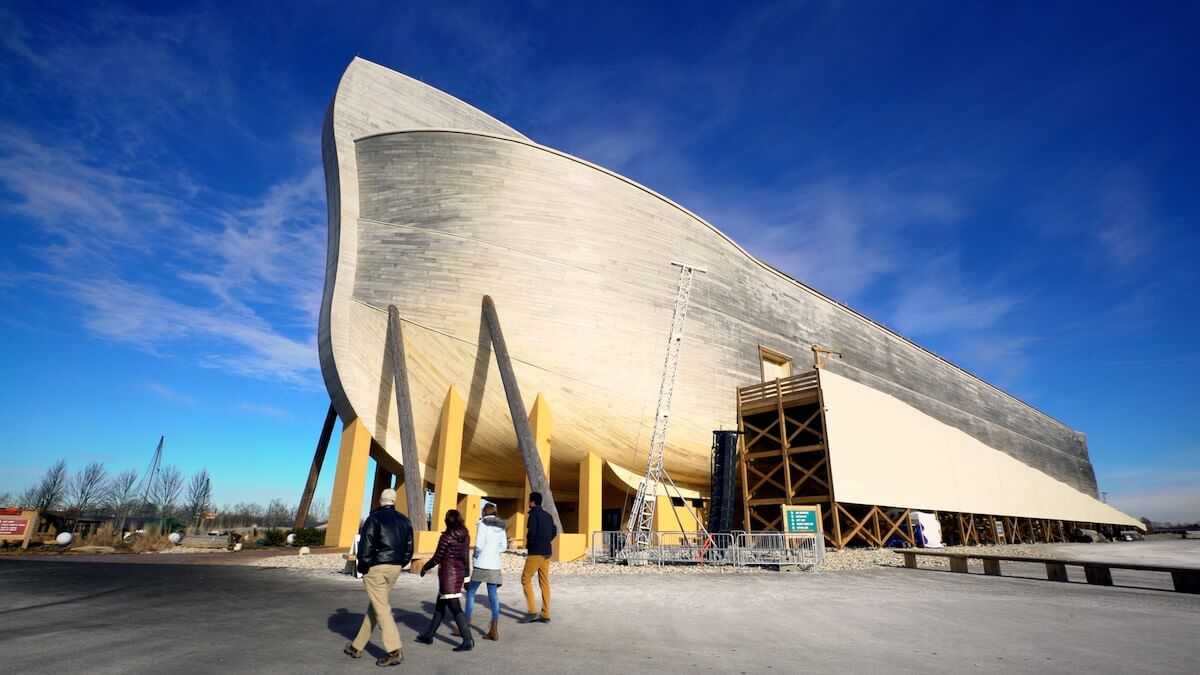 How did Theistic Evolution Bring 3 Wheaton College Students to the Ark?

Most people don’t realize how many professors at Christian colleges are theistic evolutionists.

I know I had no idea. That all changed when I was invited by a group of students to show Is Genesis History? at Wheaton College in November 2017. That experience led me to film three of them talking about these issues with Del Tackett at the Ark Encounter.

I had met the students at a creationist conference a few months earlier. They told me they had started a Creation Society on campus because almost all their professors were theistic evolutionists. They asked if I’d be willing to come to Wheaton and show the film. I said sure. 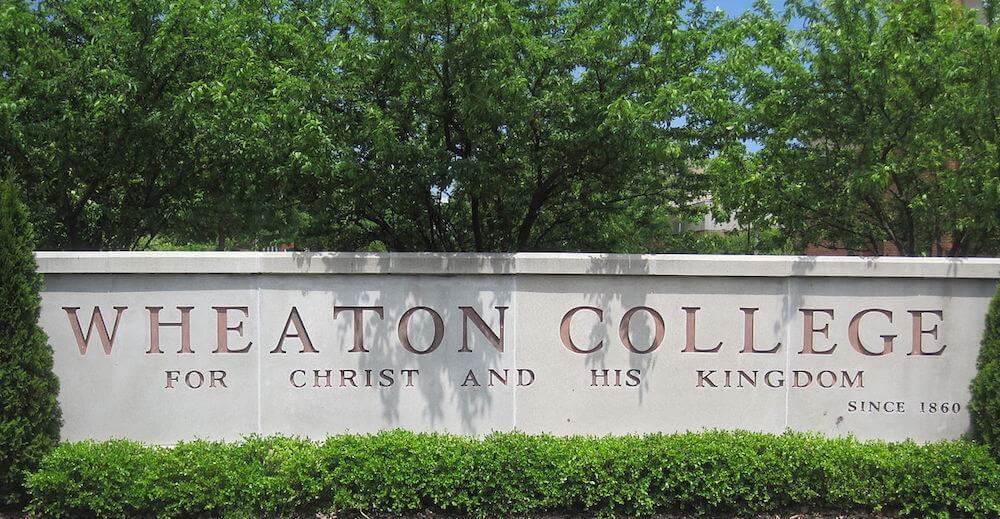 A few days before I arrived, I received an email from a student saying: “Some students are coming, but a LOT of faculty are coming. We met with our faculty advisor, and he said that some faculty are super angry that this event is even happening. They are hosting their own event Wednesday after Thanksgiving break to debunk the movie. They are also giving their students extra credit to go to BOTH events. Dr. Walton in Bible wrote a 5 page document and gave it to all the students ahead of time, to come doubting the very word history. Just a heads up. Thanks for coming.”

This was a bit unexpected. Most people assume students are the ones who get angry and protest events. But professors? Why were they angry at a creationist film being shown on a Christian campus by students? And why would they take time to write papers and plan responses to it?

He attached a copy of the document passed out to the students. It was written by Dr. John Walton, a senior Old Testament professor and scholar. I was familiar with Dr. Walton’s prior work on Genesis as well as his vocal support of theistic evolution through Biologos, an evolution advocacy group.

As I read his paper, I was amazed: here was a Bible professor at a renown Evangelical college arguing that Genesis could not be interpreted as an accurate record of historical events. Instead, “those seeking the truth of Genesis have no need to reconstruct events; they seek the message of the author.”

His arguments are reminiscent of the 19th-century liberal theologian Gerhard von Rad. They are disastrous to the historical-grammatical hermeneutic that serves as the foundation for a conservative interpretation of the Bible. Yet here they were being passed out to young students at a Christian college as the proper way to interpret Genesis. Take a minute to read his paper: it is extremely troubling. (For additional thoughts, see ‘The Gnostic World of John Walton’.)

Clearly there was more going on at Wheaton than I was aware of.

Down the Rabbit Hole

A few days later, I arrived on campus with Dr. Todd Wood. (Todd was going to be leading the Q&A after the film.) We were met by an excited group of students who took us to dinner. They were primarily sophomores and juniors, extremely articulate and smart, but a bit nervous about what was going to happen: they hadn’t expected their professors to react this way.

I asked them to tell me how the Creation Society started. They all said they were surprised to get to Wheaton and hear evolution being taught everywhere—including art classes. That was enough for one student, so he put up a note on a bulletin board asking if others wanted to form a group focusing on Biblical Creation. One joined, then another, then a lot more. By their first meeting, they had 70 students on their email list.

They then needed a faculty advisor. One of the girls said they didn’t have a lot of options since only two out of the 200 professors on campus were Creationists. I looked at Todd in surprise but he just shrugged: he said it was that way at a lot of Christian colleges; most people just weren’t aware of it.

The students had reserved the largest room in the science building. By the time we began, nearly every seat was filled. The students opened with a devotional, showed the film, then we sat down in front for the Q&A.

It was all quite cordial. As we got close to the end, I could see relief growing on the students’ faces. Clearly, this wasn’t going to turn into a heated debate; and they weren’t going to get in trouble with their professors. Afterward, we went and got ice cream.

They were energized by the film and even more so by the conversations with Todd Wood. Todd is great with students and interacts with them regularly through CORE Academy. They all had lots of basic questions about looking at the world in light of Genesis; it was obvious this was not the perspective being taught in their classes.

Right before I left, I was asked if I would consider coming back to hear the response from the professors. Their student advisor couldn’t attend, and they were concerned about defending their position. I again said sure.

Listening to the Profs

Two weeks later, I found myself back in the same classroom. This time, five professors were in front: two geologists, one astronomer, one marine biologist, and Dr. Walton himself. They asked for questions from students and the discussion started.

I sat to one side and listened. The first question set the tone for the entire evening. A student asked about the flat strata in the Grand Canyon, and Dr. Steve Moshier, a geologist, answered. He said he agreed with Steve Austin’s description of Grand Canyon strata, but disagreed with his conclusions about how it formed. He said he had a lot of respect for Steve’s work and thought he was a good geologist. They were actually old acquaintances.

I could feel a sense of ease come over the room. This was going to be collegial.

For the next hour and a half questions went back and forth: what about original sin and evolution? How should we interpret Genesis? Are Neanderthals human? What about the rock record? Since it was a Q&A, a lot of topics simply did not come up. Most of the students did not have the critical knowledge to dig deep into the subjects.

When it was over, I introduced myself to the professors. They had a slightly strange look come over them when they realized I was the producer and director of the film. But they were kind and welcoming. Any prior concerns or frustrations were kept quiet.

An Invitation to the Ark

Afterward, I again went to get ice cream, this time with just three students.

We talked about what had been said and what they thought about it. As I listened to them articulate their views, I was impressed with their honesty and candor: they were holding onto the creationist perspective in spite of a lot of pressure in the other direction.

When I asked them why they held to Biblical creation, they each said the same thing: there could be no animal or human death before Adam. As one girl explained, “If Jesus came to destroy death, and death is the great enemy, then how could a good God use millions of years of death to evolve animals and people? It doesn’t make sense.”

They talked about evolution impugning God’s goodness, how it creates problems with the new creation, and many more things. I realized I needed to get them on film.

Here was a group of young college students who had read God’s Word and were tenaciously holding onto it in spite of what their professors were trying to teach them about the history of the world and the Bible. They were an impressive bunch.

I asked them if they’d be willing to be a part of our short film with Del Tackett at the Ark Encounter. I already knew I would be filming a new segment for our Anniversary showing on February 22, but I didn’t know who I was going to include in it. Providentially, God had brought me back to the exact people I needed.

Two months later, they were in front of the cameras with Del Tackett at the Ark. I’ve written elsewhere about what they taught me. But you can watch the full interview above that was originally shown at the end of the film.

It is a good reminder that God always raises up a new generation of men and women to affirm and defend the historicity of Genesis.

Does the Bible Speak to the Age of the Earth? – Part 2

Is Evolution Compatible with the Bible? 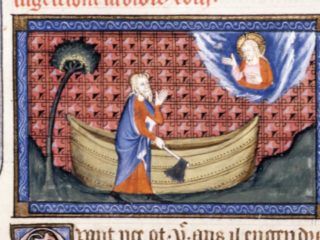 What did Jesus and Luke say about Genesis? 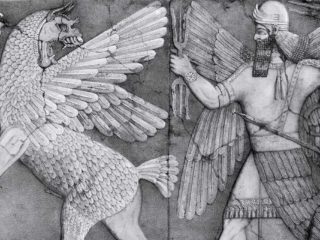 The Gnostic World of John Walton The Single Best Book on Creation & the Flood Should Genesis 1 & 2 Be Taken Literally?