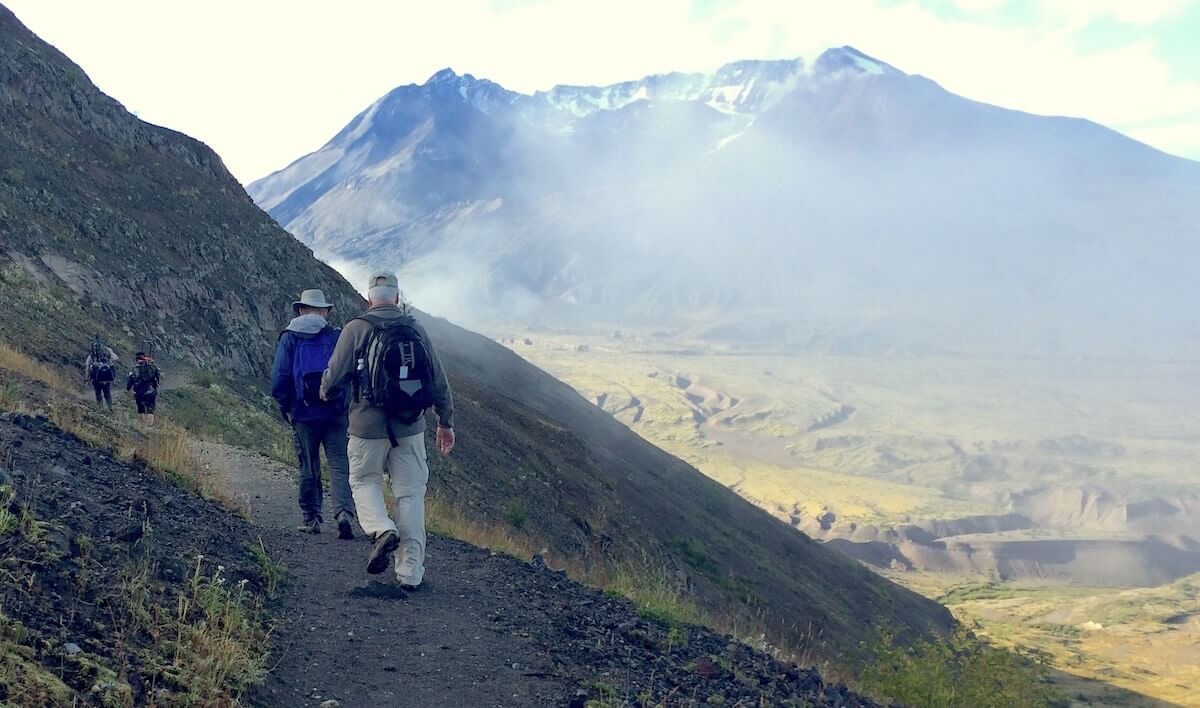 One of the first places we filmed was Mount St. Helens. I knew from the start I wanted to show people how quickly a landscape could be transformed through catastrophic processes.

While researching the project, I had read Dr. Steve Austin’s book Footprints in the Ash: The Explosive Story of Mount St. Helens

. I remember looking at the photos and thinking ‘I have to show people this.’

About six months later, I was with Del Tackett, Steve Austin, and our crew at the trailhead next to the Mount St. Helens Visitor Center. We were loaded down with backpacks, cameras, and gear.  It had rained the past two days and this was our last day there: we had one chance to shoot the first scene of the film.

We began our slow march down to the ‘Little Grand Canyon’ some 4,000 feet below us. It was a 7 mile hike to the  bottom. Steve was our guide, taking us off the trail and across elk paths to get to our destination. After about four hours, we found ourselves at the bottom of a deep ravine. A cold wind was blowing.

When we got there, it was pretty amazing to see in real life what Steve had been talking about. Just looking around and seeing what was a very normal landscape, but one that hadn’t existed 40 years before, was eye-opening: how many things had I looked at and just assumed were very old because that’s what I had been taught?

We filmed Del’s opening monologue to the film, then added Steve into the picture.  We had captured him the day before on the ridge far above us giving us an overview of the events, but down in the canyon he showed us all sorts of interesting things. Although none of this made the film, we have included it in our complete Beyond Is Genesis History? series.

How Do We Know How Old Things Are?

As far as I can tell, there are only two ways of knowing what happened in the past: someone was there to see it and tell us about it, or someone looks at the residual data and tries to reconstruct it as best they know how.

It’s obvious the former is far preferable to the latter. This doesn’t mean that forensic reconstruction doesn’t have great use: it clearly does. But it does mean that when someone accurately observes an order of events, that provides a basic chronology to which we can link all the forensic data. Time is the backbone of history.

This is one of the reasons Steve Austin calls Mount St. Helens “the rosetta stone” of catastrophic geology. It actually links up eyewitness accounts of a major volcanic eruption and the decades long aftermath with the observation of forensic data. What it demonstrates is it doesn’t take nearly as long to create certain geological structures as had been previously assumed.  Steve mentioned four things that I still remember:

1. Rapid Sedimentation – It is strange to realize that you are walking on a part of the earth that simply didn’t exist when you were born. We all have this assumption of stability and age when we look at landscapes in the world (even if we think the earth is only thousands of years old). And yet as we trooped down into the canyon area, Steve reminded us this was all new. When we got to the bottom and saw the many different layers, including the thin laminations and the flat boundaries, it was obvious that a lot had happened in a very short period of time.

2. Rapid Erosion – Again, we often don’t think of the various events necessary to arrive at a current landscape. In this case, when we were standing at the bottom next to the stream, it took us a while to grasp that where we were had at one time been covered with mud. In this case, at the exact place where we were, it had once been sky, then was mud, and now was a creek bed. The fact that this last step happened quickly through erosion which had been observed was remarkable.

3. Rapid Recovery – The next thing Steve pointed out was how many plants were growing in the area. He explained that in the years immediately after the eruption, animals also quickly returned to the area. This was because God created the natural world to be able to automatically fix itself and recover from catastrophes. It gave a new appreciation of how the world could have recovered relatively quickly from something even as massive as a global Flood with all the volcanism that would have gone along with it.

4. Incredible Complexity – The last thing that struck me was how complex and interrelated all the different events were that occurred, many of which were wiped out or changed by events that came after them. This demonstrates that geological processes are far from simple and straightforward, but that there is an incredibly interlocking complexity that is best unraveled by knowing the actual history of the events.

The final thing Mount St. Helens let me do was to let my audience experience a small paradigm shift on their own. In filmmaking and storytelling, there is a well-known element called a ‘reveal.’ It’s when a piece of information is withheld from a viewer, allowing them to follow a natural set of assumptions that actually isn’t accurate.

I accomplished this by having Del make two observations I knew everyone had been taught to relate to old ages: geologic processes and radioisotope dating. I knew everyone puts enormous trust in these two things because they have been taught from a young age to accept them. The former is established through the conventional explanation of the Grand Canyon which almost everyone is familiar with; the latter is established through school science textbooks, teachers, films, and TV shows.

And yet the one thing the conventional view rejects is the eyewitness account. According to their view of the world, no one was there to observe the majority of the events of natural history.  This applies even to Christians who have accepted the conventional view of history, since they have to see Genesis 1 as being more allegorical and Genesis 6-8 as a local flood.

However, as Mount St. Helens shows us, an eyewitness account can transform how one views the actual evidence. I wanted people to realize for themselves that there are different ways of looking at what they see around them, and that what they have been told about the geologic evolution of the earth may not be as accurate as they think.

I clearly could not get all of this information on Mount St. Helens into the documentary. I had, however, always intended to create the series ‘Beyond Is Genesis History?’ in order to provide the fuller picture. The film is just an overview and introduction; the real meat is in Beyond.  The segment above with Del and Steve at Mount St. Helens is a good example of it: there’s a lot still to learn from these scientists.