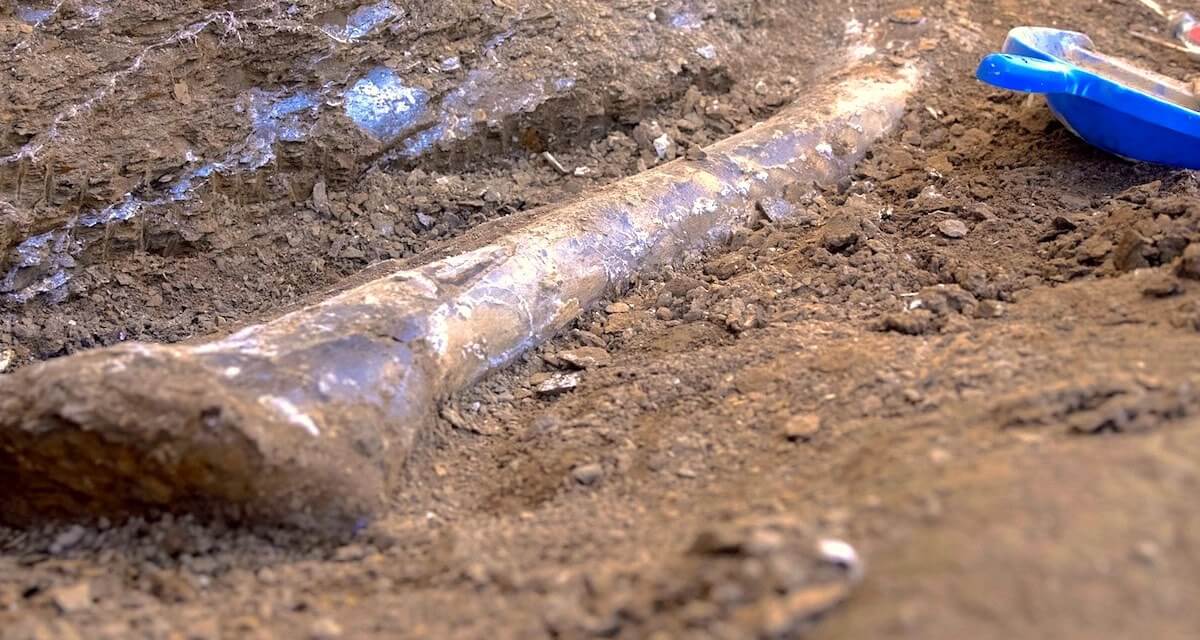 I knew pretty early in planning our documentary that we needed to talk about dinosaurs.  Dinosaurs are the iconic image of fossils and, even though they make up only a small fraction of the fossil record, they are certainly the most exciting.

When I asked Andrew Snelling and Marcus Ross about dinosaurs, they both mentioned a rather impressive dig at a ranch in Wyoming.  Their friend Arthur Chadwick of Southwestern Adventist University was in charge of it. When I called Dr. Chadwick and explained what we we wanted to do, he said he and a bunch of students and professors would be in Wyoming in June digging for the entire month. I was welcome to come up. I had never been to Wyoming before, but expected it to be a rugged, dusty environment.  I was right on the rugged part, but that year Wyoming had had an exceptional amount of rain, so everything was incredibly green. It was beautiful.

The ranch we were staying at was owned by two very kind sisters whose father had found dinosaur bones on it many years before.  He had recognized the truth of Biblical creation, so opened it up to qualified creation scientists to dig up the bones.  When we asked one of the sisters how they knew they were dinosaurs, she told us, “They were huge. We knew they certainly weren’t cow bones.”

Every year, Art and a number of other professors from Southwestern Adventist University escort a large group of students and volunteers from around the world to dig up the bones.  They stay in tents on the property, working on fossils during the day and enjoying fellowship with each other in the evening.

Art gave us directions to where he would be that first morning.  When we arrived, we saw that a small tent had been set up and an area of land cleared out.  There were about 6 people at this site, some digging in places and others doing prep work on bones they had taken out of the ground.

When we met Art, he was wearing a wide-brimmed hat and held what looked like a surveyor’s stick.  He is a Texan, so speaks with a steady, slow voice.  He greeted us warmly, then proceeded to explain what he was doing.  The stick was actually a GPS-survey tool that enabled him to do precision location measurements down to the centimeter. A number of bones had been exposed, so we watched as he touched the tip of the survey tool to different places on the bone, marking them on his machine. After he finished, students extracted the bone and prepared it for shipment to Texas.  Once they got the bones back to the university, they take 3D photos of them, then apply the GPS measurements and re-create the exact location of the bone in the earth. 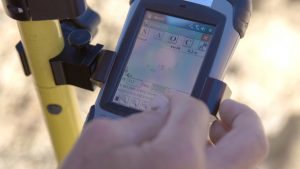 Art explained why they did this: “We’re doing what’s called taphonomy.  Taphonomy it’s like CSI, Crime Scene Investigation.  Our goal is to find out what killed the dinosaurs, what they were doing when they died, and then what happened after they died.  Did they sit around and rot, or were they buried right away?  And then what happened after they were buried to preserve the bones and change them?”

I was informed by Marcus Ross that Art’s particular approach to mapping out dinosaur bones using GPS survey was something he had introduced and perfected. It is one of the more technologically-advanced approaches to taphonomy, and Art is recognized by many in his field as an expert in this approach.

Here are what the GPS measurement results look like: 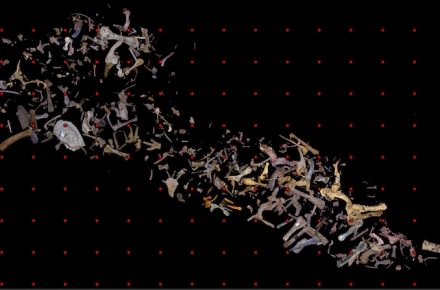 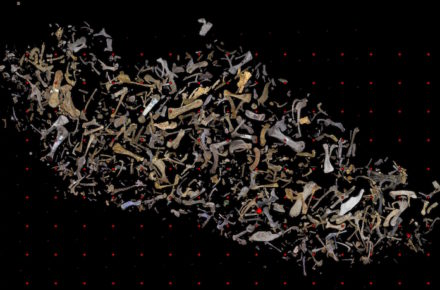 Learn more from Art Chadwick in ‘Beyond Is Genesis History? Rocks & Fossils’

As Art spoke about the area we were in, he explained they had pulled out a triceratops skull the year before which weighed about 700 pounds. The main quarry, however, was a few miles down the road. It primarily contained the remains of hadrosaurs, also known as “duck-billed” dinosaurs.  There were a number of quarries scattered about the area in which they had found many types of fossils, including the renown Nanotyrannus.

Art then explained the curious significance of this particular “bone bed.”  He estimated that the area in which they were finding bones was over 80 acres in size, with over a million bones buried in it.  The bones were concentrated in a one meter thick layer of mudstone.  They were able to be packed together like that because the bones were disarticulated.  In other words, they were not put together like we see in a museum, but all jumbled up.

He explained:  “These animals had to die and then their carcasses had to have time to rot.  So we’re talking days or weeks or months during which time the bones and tissue were either eaten away or rotted away.  And then the bones that remained were deposited instantaneously in this environment because they’re in a graded bed with big bones at the bottom and little bones at the top, and you can see that here.  The big bones are all down at the bottom.  When they start digging up here, they start to find smaller bones.  So that condition requires a sorting process that can only take place during a catastrophic emplacement.”

“The only way I know how you could develop a graded bed is if you had a catastrophic process that transported these bones and laid them all in as a single event.” – Art Chadwick, PhD

Think about this for a moment.

There is a layer of mudstone that is 1 meter (3 feet) thick and it stretches for 80-acres.  That’s really shallow and really wide.  But it’s filled with over a million bones.  The big bones are at the bottom and the little bones are the top, having been “graded” through a gravity sorting process.

In other words, something had to have killed all these dinosaurs at one time.  Their bodies floated, rotted, broke apart, and were possibly thrown up on the shore somewhere to be eaten by other dinosaurs.  Sometime later, a lot of water and mud had to pick up the enormous mass of mess, sort the bones out, then suddenly deposit everything in one place. 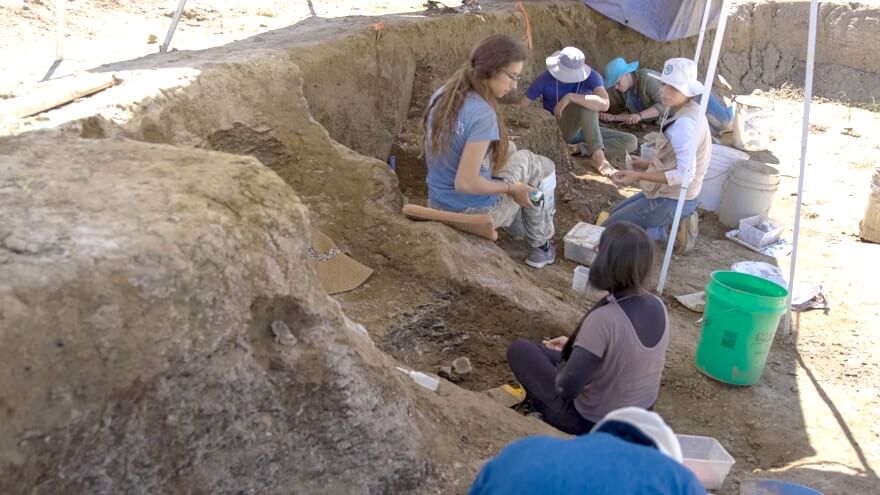 This means a huge flood is the best explanation of how these bones got into their current distribution at the ranch.  The data also paints a picture of a complex flood environment where different creatures are killed at different times, then pushed around and covered in complex ways.

Standing there in Wyoming and looking at all those bones in the ground, I realized that it was very important to be looking at actual data when it comes to pursuing questions about the events recorded in Genesis.  Actual data therefore had to be a key part of this documentary.  Whenever we could, we needed to look at real things in real places where we could put a scientist in front of it to explain what we were seeing.

But that wasn’t all.  We also needed to examine the competing interpretations of that same data.

Art explained, “The only way I know how you could develop a graded bed is if you had a catastrophic process that transported these bones and laid them all in as a single event, which is different than the standard model that other geologists had used to explain the bones.  They pretty much tell you that these dinosaurs were crossing a river at flood stage and some of them drowned and got carried downstream.  And then over hundreds of thousands of year, these bones accumulated.”

When weighing the actual data, Art’s interpretation just fits better.  In doing my research, however, I often read claims that those who hold that the events in Genesis are history are not real scientists doing real scientific work.

But that clearly is not true.  What these scientists are doing is taking the same data and examining it in light of a different scientific model.  In fact, as this instance demonstrates, their interpretations of the data often make better sense than those interpretations that ignore the events recorded in Genesis.

The key, therefore, is studying the actual data in the light of the history in Genesis.  It’s a challenging process that takes a lot of hard work. Yet it’s vitally important. As Art put it: “Somebody asked me today, ‘Where’s that exciting bone you found yesterday?’  Well, they’re all exciting to me because they’re all data, and more data we have, the more we know.”

We later traveled to Keene, Texas where we interviewed Art in his fossil repository at Southwestern Adventist University which contains over 20,000 fossils. He discussed many more topics not included in the film. Those two interviews are part of ‘Beyond Is Genesis History? Vol. 1: Rocks & Fossils.’ Watch some clips from those interviews.

You can also watch a short video of the dig sites:

If you’d like to know more about the annual dinosaur dig, go here.  You can also get access to their online fossil database with 3D images here.