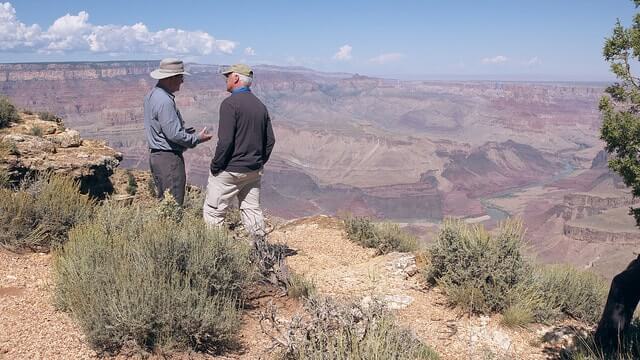 Lesson 5: What Did the Flood Do?

Then the Lord said to Noah, “Go into the ark, you and all your household, for I have seen that you are righteous before me in this generation. Take with you seven pairs of all clean animals, the male and his mate, and a pair of the animals that are not clean, the male and his mate, and seven pairs of the birds of the heavens also, male and female, to keep their offspring alive on the face of all the earth. For in seven days I will send rain on the earth forty days and forty nights, and every living thing that I have made I will blot out from the face of the ground.” And Noah did all that the Lord had commanded him.

Noah was six hundred years old when the flood of waters came upon the earth.And Noah and his sons and his wife and his sons’ wives with him went into the ark to escape the waters of the flood. Of clean animals, and of animals that are not clean, and of birds, and of everything that creeps on the ground, two and two, male and female, went into the ark with Noah, as God had commanded Noah. And after seven days the waters of the flood came upon the earth.

In the six hundredth year of Noah’s life, in the second month, on the seventeenth day of the month, on that day all the fountains of the great deep burst forth, and the windows of the heavens were opened. And rain fell upon the earth forty days and forty nights. On the very same day Noah and his sons, Shem and Ham and Japheth, and Noah’s wife and the three wives of his sons with them entered the ark, they and every beast, according to its kind, and all the livestock according to their kinds, and every creeping thing that creeps on the earth, according to its kind, and every bird, according to its kind, every winged creature. They went into the ark with Noah, two and two of all flesh in which there was the breath of life.And those that entered, male and female of all flesh, went in as God had commanded him. And the Lord shut him in.

Just as it was in the days of Noah, so will it be in the days of the Son of Man. They were eating and drinking and marrying and being given in marriage, until the day when Noah entered the ark, and the flood came and destroyed them all. (Luke 17:26-27, ESV)

“This is like the days of Noah to me:
as I swore that the waters of Noah
should no more go over the earth,
so I have sworn that I will not be angry with you,
and will not rebuke you.
For the mountains may depart
and the hills be removed,
but my steadfast love shall not depart from you,
and my covenant of peace shall not be removed,”
says the Lord, who has compassion on you. (Isaiah 54:9-10, ESV)

After the waters receded, there were layers of mud all around, especially in homes that had been flooded. Until I saw it for myself, I didn’t realize how much stuff water can pick up, carry, then drop anywhere.

Yet that was a small regional flood. I’ve seen videos of the tsunamis in the Pacific destroying entire islands where incredible mud flows obliterate everything in their paths.

But those are small compared to a global flood. Such an event would totally transform the earth in ways impossible to imagine. According to the Bible, however, there has only been one such event. When it was over, God promised He would never do it again.

Today, a global flood is questioned by some theologians and scientists. The former argue the text could be referring to a local flood; the latter say that they don’t see evidence for it.

Hebrew expert Dr. Steve Boyd points out that the word “all” is used 35 times in the Flood account: all the livestock, all the high mountains, all flesh. It seems that God is pretty specific about killing everything by covering everything with water.

Jesus clearly knew the Flood was global. That’s why He compares it to His second coming, the next global event. Both are universal judgments that will affect everyone.

But what about the evidence around us? When you realize there are enormous sequences of rock layers filled with fossils, each hundreds to thousands of feet thick, that stretch across the entire continent, you start to grasp what a global flood could do. These are huge and they are everywhere.

Thankfully for us, rainbows can be seen everywhere, too.

When you see the layers of rock in the earth, do you think about God’s judgment?

Go to Lesson 6: What Happened at Babel?