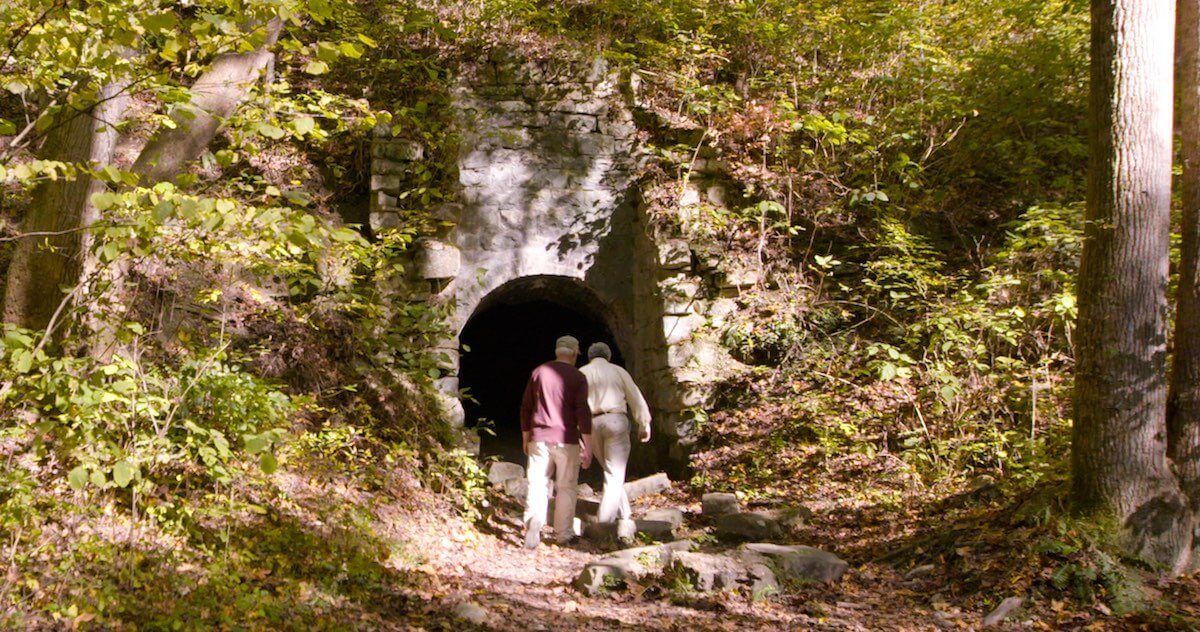 I didn’t know much about coal before starting this project. And I certainly never thought we’d be filming in the air shaft of an abandoned coal mine.

But that’s exactly where Dr. Kurt Wise took us when we were with him in Tennessee. We started at the old stone arch featured in his section of the documentary, then he took us to see evidence of catastrophes and fossil logs grown in forests before the Flood. These logs, he explained, had a direct connection to many of the enormous coal beds found all over the world.

He then led us to the entrance of the air shaft. It was basically a small cave which presented a key problem for our cameras: how could we get enough light into the space so we could actually see the coal?

Our industrious cameramen came up with an ingenious solution: they set up two large reflectors that directed the sunlight from the first to the second reflector, then into the cave. Del and Kurt were perfectly lit if they were in exactly the right spot.

AN ENORMOUS MAT OF FLOATING LOGS

I stood to one side and looked around as Kurt pointed things out. Growing up in Arkansas, I had never seen a coal seam before. I had heard Dr. Steve Austin explain his ideas about the formation of coal when we were filming at Spirit Lake near Mount St. Helens, but had not seen any actual coal.

Instead, Steve showed us the floating log mat that was still around 35 years after the eruption of the volcano. It was pretty impressive. What Kurt was talking about, however, was unimaginably big: a log mat the size of a continent.

This is what Kurt said about it as he looked at the remains of one of those logs (the full interview is on BIGH video #10):

“Well, here is an insight into that world. We are seeing logs from forests before the flood. Imagine – think about the world’s forests. You’ve got forests in the tropics. You’ve got forests in North America. The world’s forest, now bring a flood on the world, destroy the entire world, you’re going to bury some of those trees immediately. Well, what about the rest of the trees floating on top of the waters following the flood? There must have been trillions of trees.”

He went on to explain that it was the immense amount of bark dropping from those trees that was the best explanation for the origin of these huge coal beds that stretch around the world.  He observed four things:

Sure enough, when we looked at the coal in front of us, it was flat on both top and bottom. When we started looking at coal beds in photos, they always seemed to be enclosed within rock in these extremely flat layers.

Del observed this was a very curious condition, especially considering the conventional view of the formation of coal. He had been taught that wetland forests and swamps grew up, were covered by sediment, then grew up and were covered again and again over millions of years. But how could so many flat bottoms and tops have formed in those conditions?

Kurt also pointed out a strip of bark that we could see just above us in the air shaft. It was bumpy and unusual looking: this was clearly from a type of tree with which we were unfamiliar.

He observed that coal was filled with all kinds of fossilized plant parts that were easily identifiable by the naked eye. When one looked at it under a microscope, it was even more obvious that these were pieces of trees and bark, all compacted down into a solid mass.

One of the repeating themes in talking to geologists and paleontologists was the magnitude of marine fossils that can be found throughout the fossil record. This again was the case with the large coal seams: many of the rock layers found between them were filled with marine fossils.

Again, this was a curious situation: how was it possible for epicontinental seas to rapidly regress and transgress so many times that huge forests grew could grow up across enormous areas of the world, only to die out and be covered by the ocean again and again? With literally hundreds of layers of rock found between coal seams, this seemed like a difficult interpretation to sustain.

4. Coal Can Be Formed Quickly Under the Right Conditions

Finally, one of the most interesting personal experiences Kurt told us about was his working in a lab in Chicago where different types of rocks were formed through high pressure and heat situations. The formation of artificial coal was not nearly as difficult as Del and I had imagined: the right plant material could be transformed into coal in less than a month under moderate heat and pressure.

What was fascinating, however, was Kurt’s observation that a specific catalyst was necessary for the process to happen: a catalyst found abundantly in volcanic ash. This, of course, linked up to Andrew Snelling’s discussion about the wide-spread volcanism connected to the catastrophic Flood and Post-Flood periods.

For the complete discussion, listen to the full interview in the video above.

MUCH MORE FROM KURT WISE

Of course, this is just one of five segments from Kurt Wise included in Beyond Is Genesis History? Vol 1 : Rocks and Fossils. Together they provide a fascinating tour of the history of the Earth. You can watch all of them (and 15 other interviews) in volume 1. Some of the best material we filmed can be found in them – they are really great.